South united in call to act 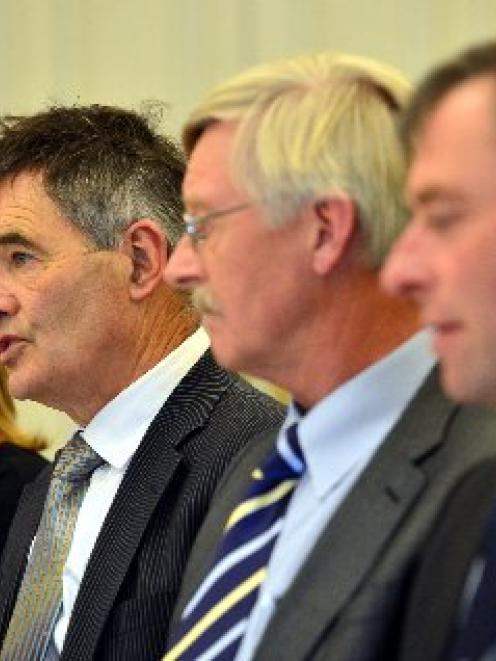 And the message would be delivered in person to government ministers and the AgResearch board by a southern delegation within days, Mayor Dave Cull said yesterday.

His comments followed yesterday's AgResearch-Invermay summit in Dunedin, which drew more than 50 delegates from organisations across the lower South Island.

The delegates spent much of the day discussing ways to save Invermay and boost the regional economy, before emerging with an action plan that was big on potential but light on detail.

The ''alternative proposition'' would be for more investment to expand Invermay, while emphasising the national, as well as regional, economic benefits that would result, he said.

When the details were finalised they would be taken to Wellington by a group of about six southern representatives.

''We're not looking for a handout. We're looking to continue to take advantage and build on the resources already in the region.''

The plan prompted a favourable response from Prime Minister John Key, who said yesterday he was encouraged by the regional approach and stressed the AgResearch proposal was ''far from a done deal''.

Earlier, Mr Cull said there was ''broad consensus'' at the summit about the ''critical'' importance of Invermay to the Dunedin, regional and national economies.

There was also agreement about the threats posed by AgResearch's plan to shift 85 Invermay jobs to either Lincoln or Palmerston North.

She told delegates the Southland environment was ''very different'' from Canterbury's, and Invermay's research needed to occur in southern conditions and be presented ''first-hand'' to farmers to change habits.

The Government wanted growth, including in the agricultural sector, but also improved water quality. If many of Invermay's top scientists shifted, it would deliver a blow to key research, as well as to the country's export-led recovery.

That included 30% of New Zealand's sheep flock, 13% of all dairy cattle and 35% of the country's deer herd, he said. Invermay's research was ''critical'' to addressing those environmental issues, but a ''thriving'' research centre in Dunedin would deliver economic benefits across New Zealand, he said.

The primary sector contributed nearly $1 billion of Otago's GDP last year, and 39% of all jobs in the South came from sheep, beef and dairy farming.

Mr Cull said the University of Otago also enjoyed close links with Invermay, including 60 joint research projects carried out in the past three years, and the potential for ''considerably more''.

The summit included lengthy discussion of broader issues of regional development, but Mr Cull said the focus initially was on the threat to Invermay.

The summit was chaired by Mr Cull and included delegates from eight councils across Otago and Southland and more than a dozen other organisations, from Federated Farmers and the Otago Chamber of Commerce to the University of Otago.

Mr Cull said the gathering was ''probably a first'' and ''quite exceptional'', while deputy mayor Chris Staynes said the regional approach could become a more common occurrence.

''Perhaps we haven't been doing that as well as we could. I think today was a very positive step in that direction.''