Spirit of protest not dampened by rain 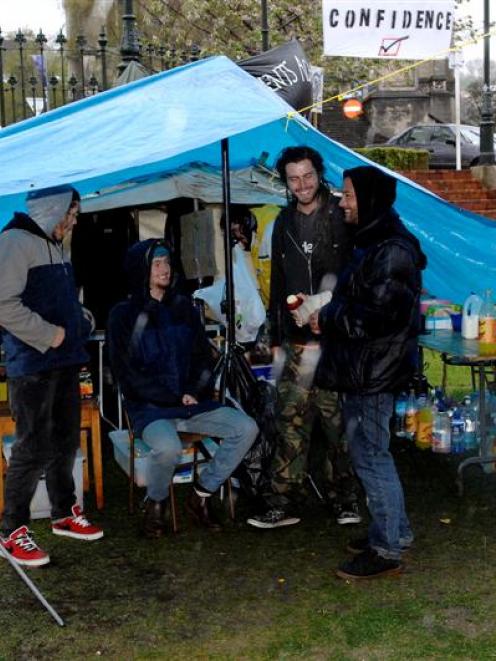 Sheltering in a makeshift camp kitchen in the Octagon are protesters (from left) Kane Bevins, Angus Rooney, Ron Jorgenson and Reece Thomas (all of Dunedin). Photo by Linda Robertson.
Anti-capitalism protesters are yet to decide how long they intend to stay in the Octagon, but the Dunedin City Council is going out of its way not to put pressure on the group to respond to its request for a timeline.

About 100 protesters are living in about 30 tents, occupying the upper Octagon as an extension of the global Occupy Wall Street protests, which began on October 15.

Council chief executive Paul Orders and Dunedin Mayor Dave Cull met the group on Monday for a peaceful discussion about how long the protesters intended to occupy the Octagon.

After the meeting, Mr Cull said a council staff member would be sent into the Octagon to ask if the group had made a decision, and the council would then make a decision on what action, if any, would be taken.

However, Mr Orders said a staff member did not go to the Octagon yesterday.

Instead, he would wait for the group to address the council during a DCC public forum tonight.

"I think what we will get from that is what their thinking is, and the council will review matters after public forum," Mr Orders said.

During Monday's meeting, Mr Cull and Mr Orders made it clear the council did not want the protest to go on for weeks, and preferred a mutually respectful agreement be made without "heads butting" and the police getting involved.

Meanwhile, the group appeared to be unperturbed by the wet weather. Many took shelter in their tents while others congregated in the covered stage area.

A spokesman for the group was unavailable to comment last night because the protesters' "general assembly" discussions were still taking place.

"We are working on occupy time, not real time."