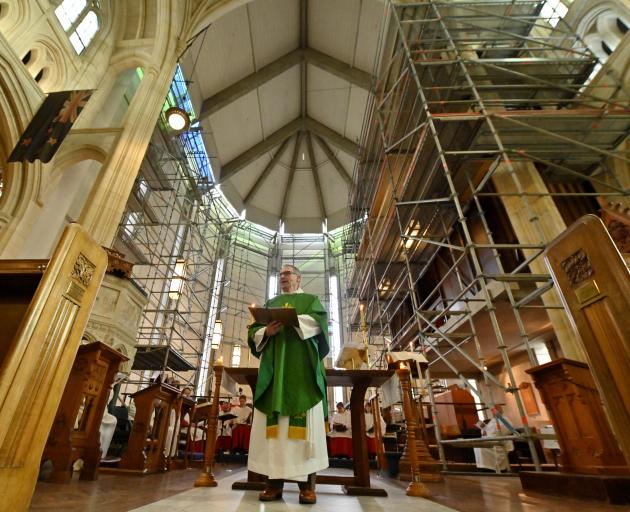 The Rev Dr Tony Martin welcomes parishioners to the choral eucharist at St Paul’s Cathedral, Dunedin, yesterday morning. The cathedral’s chancel is lined with scaffolding to allow the replacement of windows and the refurbishment of the organ. PHOTO: GERARD O’BRIEN
Extensive upgrade work is under way as part of a $100,000 project to replace leaking skylights at St Paul’s Cathedral and refurbish the cathedral organ.

The Dunedin City Council has given resource planning consent for the renovations, and a council report says replacing the chancel skylights would "improve the weather-tightness and structural safety" of the building.

Cathedral dean the Very Rev Dr Tony Curtis said that skylights at the top of the cathedral chancel — the tall concrete space behind the altar — had begun to leak.

"It should really improve the experience both for us and for visitors," he said.

It had earlier been hoped to make extensive improvements while maintaining the heritage values of the Category 1 listed building, but the work had previously been delayed by the Covid-19 lockdown.

Replacing skylights and windows and refurbishing the organ were among a series of positive changes being made at the cathedral, which would keep it dry despite challenging winter conditions, he said.

In a report to a senior DCC planner, the council’s heritage adviser Dr Andrea Farminer had described the proposed chancel remedial work.

The applicants were proposing to replace "an existing row of single-glaze, clear and Georgian-wired skylights" situated along the Apse roof at the west end of the building.

The chancel, an addition completed in 1971 to a design by Dunedin architects McCoy and Wixon, was lit by nine bays, each of four lights, located below the roof — making a total of 36 windows, the report said.

Dr Curtis said project management was being undertaken by Logic Group, the glasswork was being done by Viridian Glass. Some work was weather dependent, and he hoped it could be done by the end of next month.

It would be a "good first step" to protect the cathedral’s future.