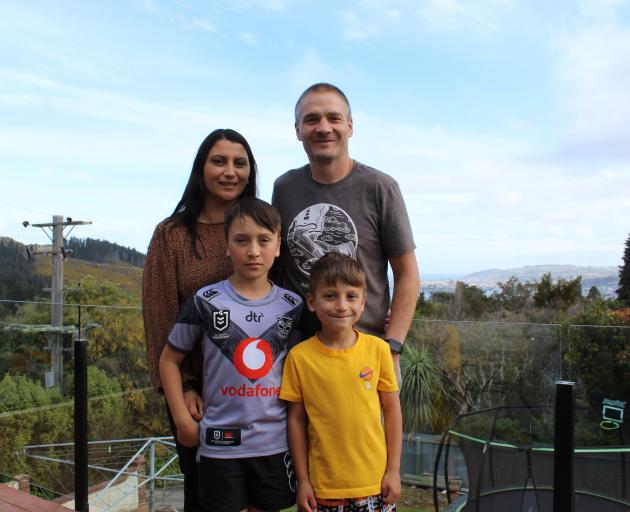 Opoho family Cherie and Corey Ford and their sons Nikau (10, left) and Ihaia (6) are grateful for community support after Mr Ford’s injury. PHOTO: SIMON HENDERSON
A Dunedin man is happy to be back on his feet after a sporting accident left him temporarily paralysed from the neck down. Reporter Simon Henderson talks to Corey Ford about his recovery.

Those were the first words Corey Ford, of Opoho, said when he regained consciousness after an accident on the basketball court.

Mr Ford was playing guard for the Andersons Bay Falcons red team against the Otago Boys' High School OB's Too team in June when he had an accidental collision with another player.

‘‘I just kind of recall colliding with another player accidentally and then waking up, coming to on the ground in the recovery position.’’

His wife Cherie Ford said it was possible during the collision he knocked himself out and then hit the ground face first, which hyper-extended his neck, causing damage to his spinal cord at C4.

One of the other players was Dunedin firefighter Tony McIntyre, and the first thing Mr Ford said to him when he came to was ‘‘Mate, I can’t feel anything.’’

He could not feel his body from the shoulders down and Mr McIntyre reacted instantly, bracing Mr Ford’s head.

An ear, nose and throat specialist was playing on another court at the same time and came over to help until ambulance staff arrived.

Mr Ford spent a night at Dunedin Hospital before travelling to Christchurch Hospital via the Flying Doctor Service.

He spent about five days at Christchurch Hospital while he waited for a bed at rehabilitation facility Burwood Hospital.

When he arrived at Burwood Hospital he could barely feel anything from his shoulders down, and was able to achieve only a small amount of movement in his hands and feet.

Mr Ford experienced neuropathic pain which felt like his whole body was burning from the inside.

‘‘Quite an intense burning, pins and needles ... fiery pain.’’

Balancing his pain medication took some time to get right, ‘‘probably about four weeks’’.

Then he could begin rehabilitation, getting on his feet with the help of a walking frame.

Three physiotherapists helped him relearn to walk, one on each leg, and one behind with a wheelchair to help ensure he did not topple over.
‘‘They moved my legs for me, so giving me the motion of walking.’’

At the peak of fitness before the accident, Mr Ford experienced some ‘‘pretty dark days’’ during his recovery.

But the team at Burwood Hospital had been ‘‘amazing’’.

‘‘You have got people to talk to and people to be beside you at all times.’’

After 10 weeks Mr Ford returned to Dunedin to continue his recovery.

He was improving, but had reduced feeling in his feet.

‘‘You know, how you put your feet in real cold water and they go numb.’’

His hands still felt stiff and swollen, and although he was able to walk it was slow and unsteady.

The experienced had ‘‘changed his life’’.

Mr and Mrs Ford said the outpouring of support the family had received since the accident had been ‘‘overwhelming’’.

His brother Chris Ford and brother-in-law Graham Bland had raised about $8000 via a Givealittle page.

Mr Ford was a member of South Island Wakeboarding, which was running a fundraiser in Hokitika this weekend.

The Alhambra Union Junior Rugby Football Club, of which the Fords’ sons Nikau and Ihaia were members, had run fundraisers.

They were humbled but grateful for all the support they had received from parents, family, friends and the local community over this challenging time.

‘‘You just realise how much people rally round when you need them,’’ Mr Ford said.

‘‘We speak Maori and are in quite a Maori community and all we think of is just the aroha and the manaaki that the wider community, whanau and friends have shown us,’’ Mrs Ford said.