'Star' singer takes to the field for Carisbrook test 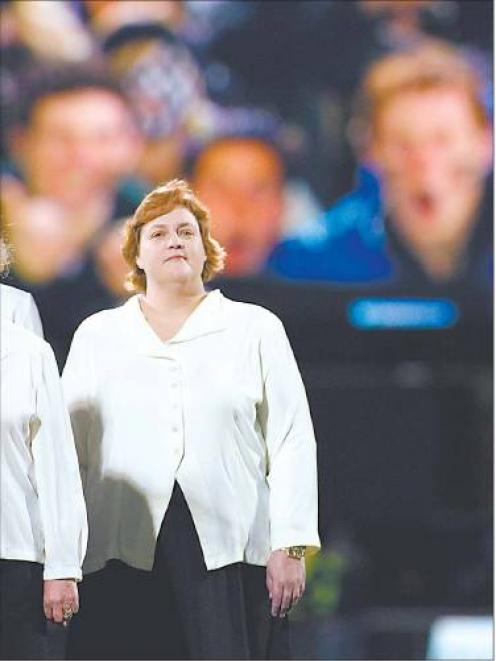 Pre-performance nerves: Star chief reporter Brenda Harwood prepares to back up Dunedin Mayor Peter Chin in the singing of the New Zealand anthem to open the All Blacks’ Tri-Nations test against the Springboks at Carisbrook. Picture: Derek Morrison
The South African national anthem has been running around in my head for weeks.
Driving, walking, eating, and in the shower, the phrase ‘‘Nkosi sikelel' iAfrika . . .'' has been at the top of my mind. It has been the same for about 30 of my City of Dunedin Choir colleagues, who made up the national anthem backing group at Carisbrook on Saturday night.

The process of committing something like that to memory, in four languages and four-part harmony, is relatively simple. Repetition . . . lots and lots of repetition.

So, as the big day approached, I was feeling relatively confident that I had the anthems off pat.

Even so, the prospect of standing out in the middle of Carisbrook in front of a live crowd of 29,000-plus and a television audience in the tens of millions was more than a bit scary. We also had a nervous eye on the weather, as choir members were to wear their formal uniforms - black suit for the men, and a long black skirt and cream blouse for the women.

Friends were amused, making jokes about ‘‘wet T-shirt competitions'' and other potential disasters that would be captured on international television.

The nerves were soothed after we attended a dress rehearsal at Carisbrook on Friday night, along with feature singers Claire Barton and Dunedin Mayor Peter Chin.

The big day (fortunately fine) was a blur of activity and by the time the choir members caught the bus to Carisbrook, the overriding feeling was one of excitement. There was time for several visits to the loo, a couple of run-throughs, and we were out on the pitch, surrounded by lights, noise and thousands of people.

For a minute, it was a bit overwhelming - then I caught sight of the friendly face of Star colleague Derek Morrison, whose photos adorn these pages. And then . . . the music started and it was over in a flash - we sang the anthems, marched off, and that was it. My mum is proud, and I can look back on an experience I will never forget.