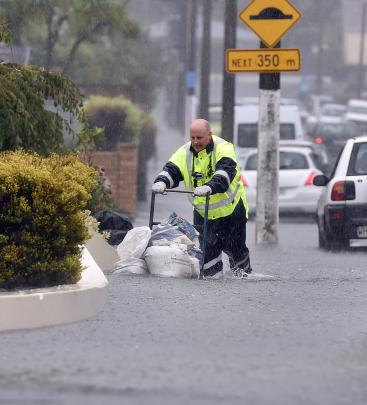 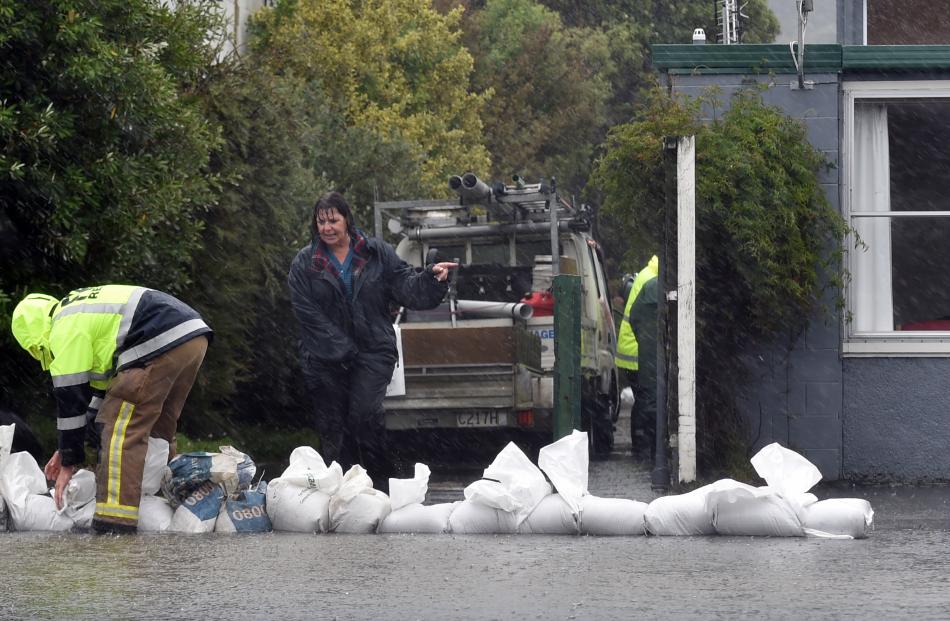 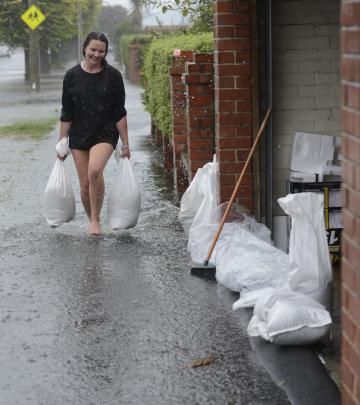 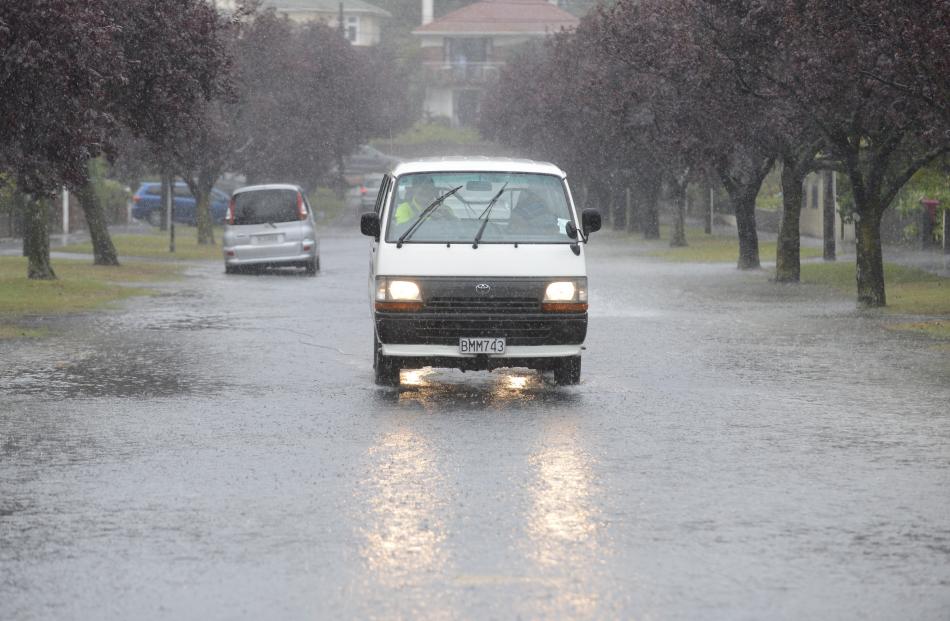 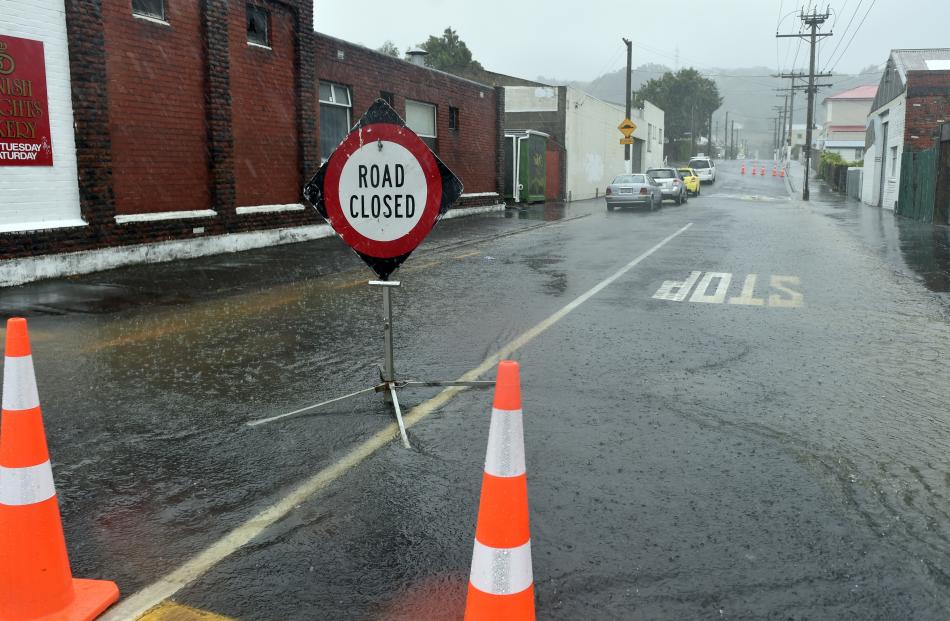 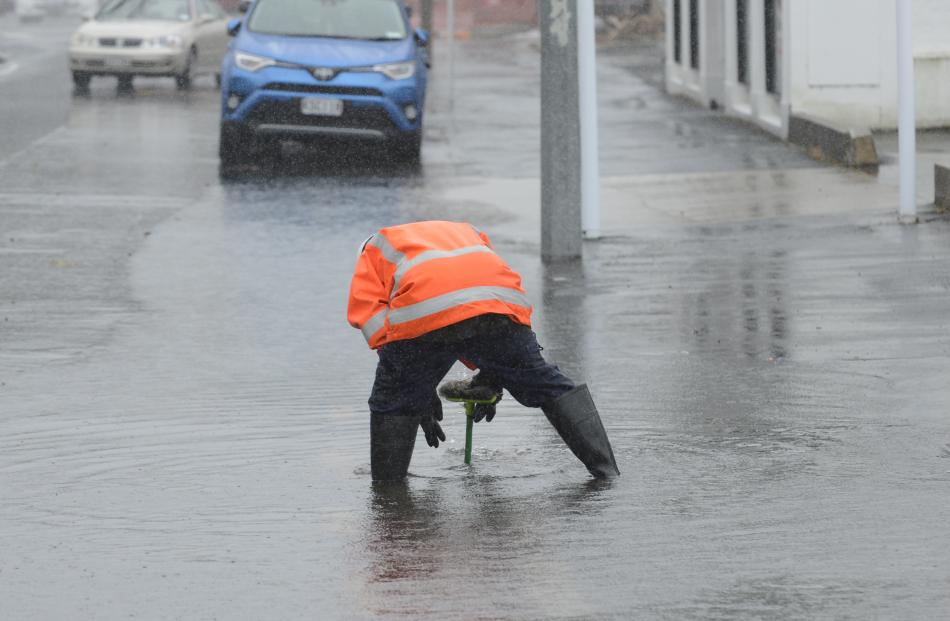 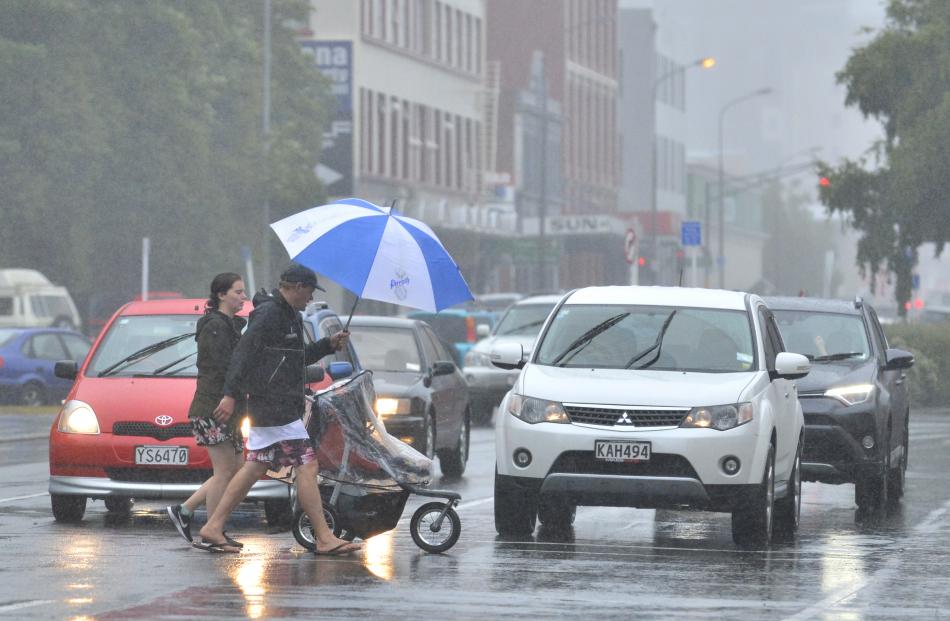 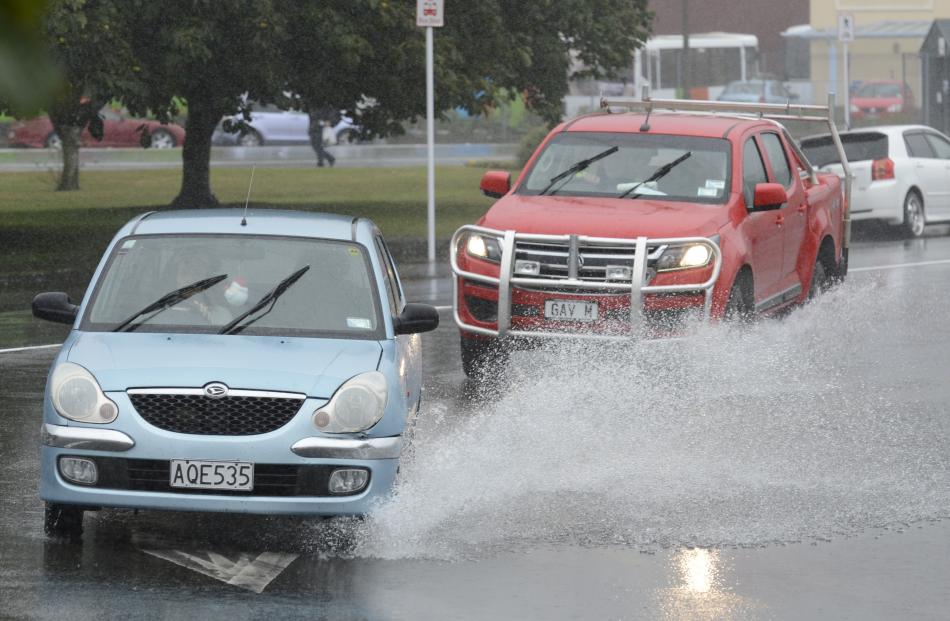 Motorists drive through a pool of water at the intersection of Andersons Bay Rd and Crawford St. Photo: Gerard O'Brien 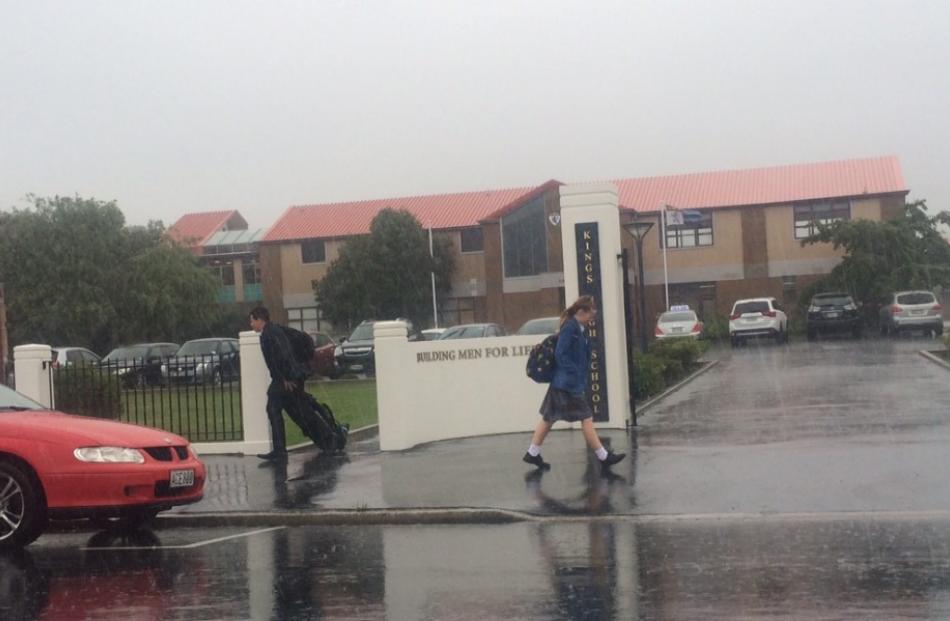 King's High School is one of several schools to close early owing to flooding concerns in Dunedin. Photo: Christine O'Connor 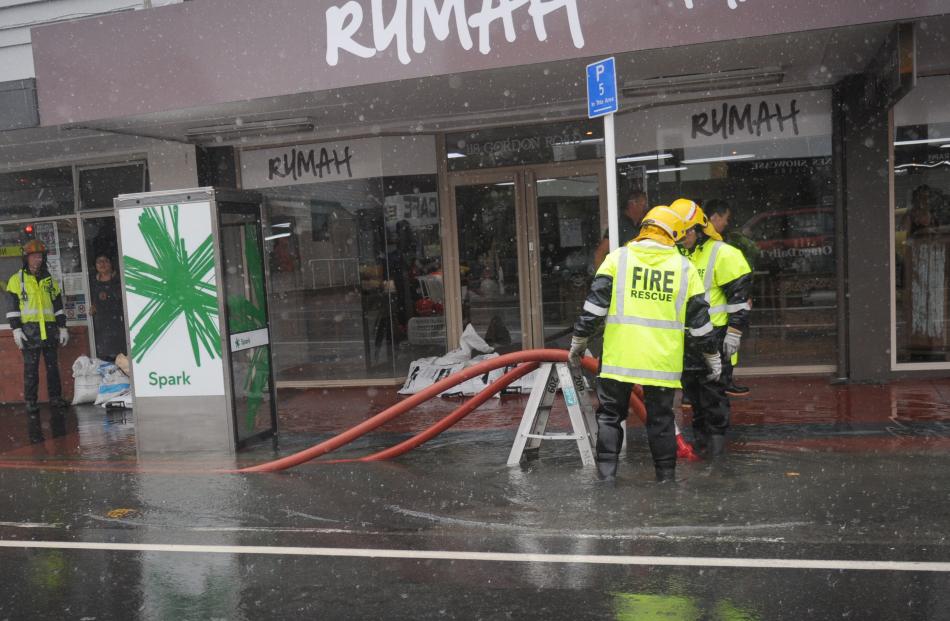 Flooding on a street outside shops in Mosgiel. Photo: Christine O'Connor

Rain is easing in Dunedin and once overflowing floodwaters that reached their peaks are settling down and are expected to gradually recede throughout the evening.

Dunedin Civil Defence Controller Leanne Mash said the state of emergency declared earlier today would remain in place overnight and would be re-examined in the morning.

Rain and winds have eased off and river levels are dropping, but there are still areas with surface flooding.

Residents of a South Dunedin rest home are being evacuated after torrential rain caused flooding as it lashed the city.

Managing Director of Radius Care Brien Cree said their primary goal was the safety of the staff and patients at Radius Fulton Home.

Patients were being moved with the assistance of local DHB, Civil Defence, emergency services and family members, he said.

“Management at Radius Fulton is being well supported and we have activated our contingency emergency plans and are confident of a safe and speedy evacuation of the premises.” says Mr Cree.

Around 800 Dunedin homes are at risk of being inundated with sewage contaminated flood water.

A state of emergency was declared at 2.20pm today, as of just before 5.30pm Metservice said 103.4mm had fallen in the city, it predicts 112.4mm is to have fallen by midnight tonight.

"That is more than our system is designed to cope with, even though it has operated exactly how it is intended to,'' Mayor Dave Cull said.

There was now "significant flooding" across Dunedin and the city's infrastructure was being overwhelmed in places, including South Dunedin and Mosgiel.

Meanwhile, Southern District Police have urged motorists to avoid all non-essential travel and take extreme care if they needed to hit the road today.

Wastewater and floodwaters have already mingled in Surrey St, Forbury, and more South Dunedin streets were expected to be affected.

"If we get waste elements in the flood waters we will have to evacuate, and we needed a state of emergency for that,'' Mr Cull said.

She said 800 properties were potentially at risk, but precise numbers would depend on how much rain was still to fall.

"All storm water should be treated as contaminated.''

There were reports of potential contamination on Kaikorai Valley Rd and Hargest Cres.

Schools had closed early to keep cars off the road, and Civil Defence urged people to head home from work early - especially if they used the Port Chalmers or Peninsula roads, as a king high tide was expected around 5pm.

"We think there is potential for those roads - the Portobello road in particular but SH88 as well - to be affected,'' Mr Saunders said.

Motorists were asked to drive only if essential, and to keep speeds down to avoid creating waves. 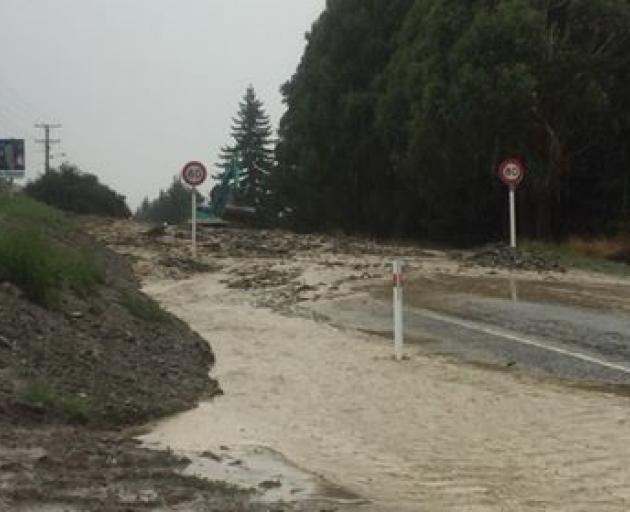 SH8 near Roxburgh has been covered in mud. Photo: Robin Fox Berthault

Evacuation centres were set up at the Caledonian Gym and at Mosgiel's Memorial Park Hall but were closed at 7pm due to lack of demand.

The army had been notified and were available if required, she said.

The Taieri has also been hit hard, with extensive flooding in Mosgiel and its surrounds.

"There has been a significant amount of surface water in Mosgiel . . . and it has been too great for the system to cope with,'' event controller Richard Saunders said.

"There has been some flooding issues out there.''

The Otago Regional Council has issued a flood warning for the Water of Leith and Lindsay Creek, both expected to peak at 3pm, and says there is a risk they could overflow into residential areas.

However, by 7pm Dunedin rivers were easing after reaching their peak at about 3pm.

The Water of Leith at the University Foot Bridge at 6.30pm was measured at 23 cumecs, down from more than 60 at its peak.

Also at 6.30 Lindsay Creek at North Rd bridge was 5 cumecs, down from 15 a few hours earlier.

The rain was expected to ease significantly by around 6pm tonight, but it will take some time for floodwaters to recede.

Water is entering sections in Surrey St where sandbagging is taking place and also on Macandrew Rd at the Forbury Rd end. Malvern St in Leith Valley is also flooding.

Mr Cull said there was now significant flooding in areas across Dunedin, particularly in South Dunedin and Mosgiel.

“We will continue to keep the community informed and we are doing everything we can to keep people and properties safe.”

A mudslide caused by a blocked culvert has brought rocks and debris down on to Lindsay Rd in Caversham, blocking it.

There was also fallen branches and trees, and rocks on the roads.

Senior Sergeant Brian Benn said a large number of roads across the district were closed or affected.

SH8 was closed between the Millers Flat Bridge and Scotland Street in Roxburgh due to flooding at Black Jacks Creek, Snr Sgt Benn said.

There was also "severe surface flooding" across South Dunedin and a number of roads were closed.

Portsmouth Dr and Portobello Rd were down to a single lane and high tide is expected around 5pm.

"This means the flooding will still increase so we ask that people avoid these waterfront areas and riverbanks, particularly the Leith River in north Dunedin.

"Traffic is also building up in central Mosgiel as Gordon Road is currently closed between Cargill Street and Factory Road due to surface flooding.

"There are limited diversions so we ask that motorists stay away from this part of town," he said.

They had advised management to evacuate residents from the building, he said.

Queenstown Lakes District was reporting significant flooding on Mt Aspiring Road outside Wanaka between Mt Roy carpark and the lake front near Ruby Island, and the road may be closed this afternoon.

Several roads at the head of Lake Wakatipu are also closed.

Central Otago District Council was warning of fallen trees in the Maniototo, as well as surface flooding on roads across the district.

More rain was possible in western parts of Otago.

A strong wind watch is also in place for North Otago, Dunedin and Clutha until midnight tonight.

Severe weather is also expected in Southland and other parts of New Zealand. Peak intensities of 15mm to 30mm per hour were forecast.

He had spoken Fire and Emergency New Zealand, which was "very aware" of flooding issues and had firefighters available to respond.

After a "very intense" 24 hours fighting the Burnside blaze and other fires exacerbated by yesterday's heat and wind, they faced the likelihood of another busy day, but Mr Hawker was confident they would be up to it.

"They have got a lot of very tired people."

As a result of the heavy rain, there are some minor wastewater overflows to waterways around the city. These are emergency overflows to prevent wastewater backing up and running on to private property or roads.

As a precaution, the emergency outfall at Lawyers Head has been opened to alleviate pressure on the Tahuna wastewater treatment plant.

A power outage in West Harbour means two wastewater pump stations are discharging into the Otago Harbour. This discharge will stop when the power is restored.

Several roads are closed and strong wind warnings are in place across many parts of the South Island today.

The New Zealand Transport Agency strongly advised users crossing the alpine passes, especially SH73 and the Coastal SH6, to avoid travel unless essential due to the deteriorating weather.

Parts of SH6  have closed this afternoon due to strong winds:  SH 6 Westport to Greymouth (Westport to Rapahoe), SH 6 Inanagahua Jnc to Westport and SH6 Hokitika to Makarora.

The South Island storm is a significant weather event and  the combination of rain, wind and storm surge is causing streams and rivers to rise, flooding, slips and coastal inundation, and trees to topple, making driving hazardous.

The New Zealand Transport Agency says road users should take care on State Highway 94 (Te Anau Downs to Fiordland National Park) due to heavy rain and drive to the conditions.

The Queenstown Lakes District Council advised this morning that the Mt Aspiring Rd is closed past the Treble Cone turnoff due to surface flooding.

Paradise Rd is closed at the Priory Road intersection as the first ford at Jordan Creek is impassable. It will remain closed until river flows have dropped and the roading team can repair it.

There have been no reports of flooding or other issues following heavy rain overnight, the Clutha District Council said late this morning.

However, local Civil Defence staff would continue to monitor the situation and work with Otago Emergency Management staff as needed.

The council said people should take usual precautions, including keeping an eye on streams and rivers that could rise rapidly, and driving to the conditions.

Current water restrictions remain in place, it said, as the intensity of the rain and runoff may affect treatment plants ability to produce water. The council would keep a close eye on water schemes in the next day or so.

The Pomahaka River has continued to rise with water spilling on to the road.

Detours are signed at Black Gully Rd and Cross Rd.

Flooding signs have been opened at Burkes Ford in anticipation of water levels rising there overnight.