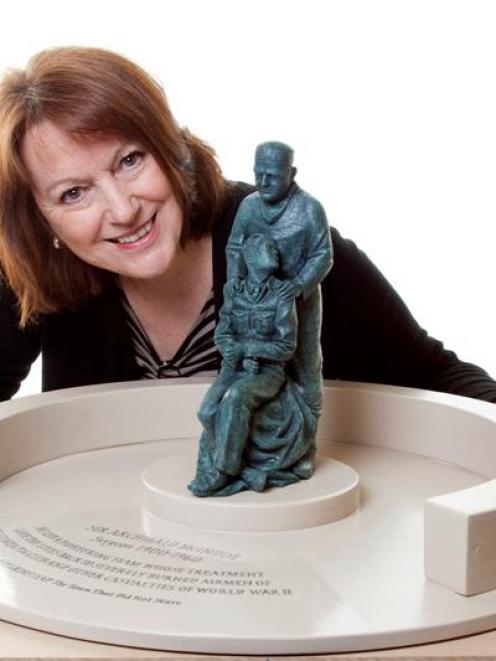 Sir Archibald, who treated badly burned Allied servicemen during World War 2, will be honoured with a 2.1m bronze statue in East Grinstead, England.

British sculptor Martin Jennings said he felt ''lucky'' to have been commissioned for the statue because his father was badly burned when a shell hit his tank in 1944 and was treated by Sir Archibald.

''He helped restore not only the bodies of these disfigured young men but crucially their minds, too.

''The commission is even more important to me given that he treated my father,who throughout his life said how grateful he felt to McIndoe.''

He said the statue was also tribute to the men of the Guinea Pig Club, as the patients of Sir Archibald at Queen Victoria Hospital, in East Grinstead, were known.

By the end of the war, the ''drinking club'' had 649 members including Canadians, Australians, New Zealanders, Americans, French, Russians, Czechs and Poles.

''I want to make more than just a statue of the great surgeon.

''McIndoe's story is inseparable from that of the Guinea Pig Club, his burned boys for whom he was a cross between compassionate parent and strict figure of authority.''

The statue represented Sir Archibald with a patient, with burns to his face and hands, wearing a RAF uniform.

''The pilot is turning his head to look back up to the sky in which he can no longer fly but also towards his doctor for reassurance.''

The statue would be placed in East Grinstead and would cost about 170,000, he said.

Donations could be made at www.mcindoememorial.com.

Sir Archibald McIndoe was born in Dunedin in 1900, educated at Otago Boys' High School, and studied medicine at the University of Otago. He completed further study in the United States.

He moved to London in 1930 and was appointed consultant in plastic surgery to the Royal Air Force in 1938.

At the outbreak of World War 2, he moved to East Grinstead and founded a centre for plastic and jaw surgery and treated deep burns and serious facial disfigurement. He continued to live and work in East Grinstead until his death in 1960, aged 59.