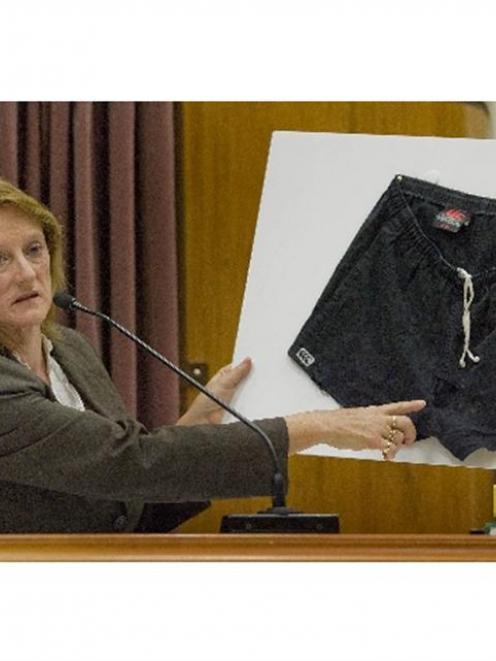 Forensic biologist Sally-Ann Harbison points to a blood-stained area on the shorts David Bain was wearing on the morning of the murders.
DNA from Stephen Bain was found in blood taken from the socks, shorts and a T-shirt worn by David Bain the morning 14-year-old Stephen, his parents and sisters were shot, the High Court at Christchurch heard yesterday.

And full DNA profiles from Stephen were also present in blood samples from heavily blood-stained fabric gloves recovered from the floor of Stephen's bedroom and from several places on the rifle used in the 1994 killings.

The .22 Winchester belonged to David Bain but the court has heard both David and Stephen used it for rabbit-shooting.

And earlier this week, there was evidence David Bain bought a pair of white stretch-fabric gloves to wear to a ball at Larnach Castle just over two weeks before the shootings.

The Crown contends David shot his parents and three siblings - Stephen after a violent struggle - while the defence argues Robin killed his wife and three of his children before committing suicide in the front room of the Every St property.

The Crown also says Stephen's blood was transferred to parts of the rifle and to his older brother's clothing during the fight, because the younger boy was bleeding profusely from a bullet wound to the scalp.

Bain was convicted of the murders a year after the killings happened but is now being tried again as a result of a Privy Council ruling two years ago.

ESR forensic biologist Sally-Ann Harbison was giving evidence on the 36th day of the retrial of David Bain (37) on five charges of murder.

Dr Harbison described the DNA profiling tests she carried out in 1997 when the case was being reviewed. She was able to establish DNA profiles for all of the Bain family members from reference samples.

Those were then compared with any DNA profiles she obtained from staining on various items of clothing, as well as the .22 Winchester rifle and a green curtain from the front lounge.

Stephen's DNA was also found in a blood stain from the crotch of the accused's black rugby shorts, as well as a stain on the lower back of Bain's "Queen's Baton Relay" T-shirt. He was wearing those items on the morning of the shootings.

In answer to a question from the jury about how the blood-staining on the T-shirt might have occurred, Dr Harbison said she thought is was more likely to be from direct contact rather than from soaking or leaching through another item of clothing such as a woollen jersey.

She said she took 10 samples in total from the rifle used in the killings and four of those provided full DNA profiles for Stephen Bain.

Testing also revealed DNA from Stephen in a small blood spot on the left edge of one of the curtains screening the computer alcove in the front room. The mark was about 65cm above the bottom of the curtain.

Robin Bain's body was found on the floor near the curtains on the morning of the shootings, the rifle lying nearby.

She was unable to obtain a profile from the blood sample from Robin Bain's green woollen hat but that could have been because it was often difficult to obtain DNA profiles from staining on such materials.

Robin Bain's DNA was also present in staining on the fabric of a striped shirt he had been wearing when he was shot.

The trial of David Cullen Bain (37) continued in the High Court at Christchurch yesterday.

The Crown, represented by Kieran Raftery, Cameron Mander and Robin Bates contend Bain murdered the family, using his early morning paper round as an alibi and made it look like Robin shot them before committing suicide.

But the defence, represented by Michael Reed QC, Helen Cull QC, Paul Morten and Matthew Karam argue Robin was the killer and turned the gun on himself because he was about to be exposed for an incestuous relationship with his younger daughter Laniet.

The trial, before Justice Panckhurst and a jury of seven men and five women, began on March 2 and the Crown case is likely to be completed within the next two weeks.