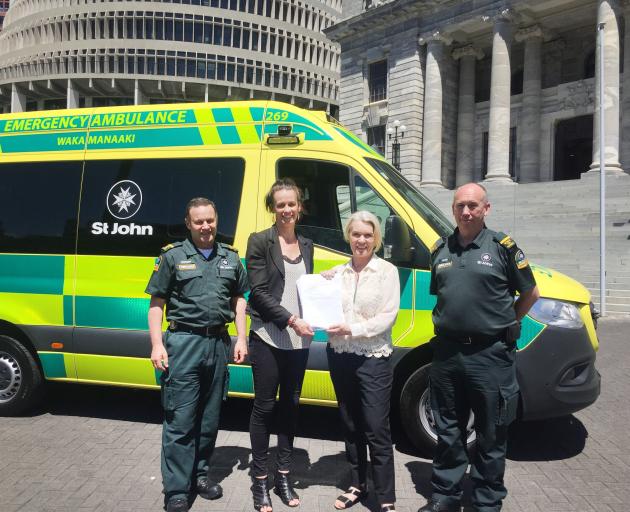 Pauline Latta (second left), of Mosgiel, hands her petition to Taieri MP Ingrid Leary, flanked by St John intensive care paramedics Johnny Mulheron (left) and Mark Quin, at Parliament. PHOTO: SUPPLIED
A literal bolt of lightning could not stop Pauline Latta from taking her push to have St John fully funded to the steps of Parliament.

Ms Latta, of Mosgiel, flew to Wellington to deliver her 51,000-signature petition to Taieri MP Ingrid Leary at Parliament yesterday.

But it was not an easy trip.

After her flight from Dunedin was cancelled on Wednesday, she got up at 3am yesterday to drive to Invercargill.

Her flight from the South hit a snag when it was hit by lightning and had to return to Invercargill.

But, finally, she made it.

"It was pretty exciting," she said of handing over the bundle of signatures calling for the ambulance service to be fully funded.

But as satisfying as that was, now she wants action.

She knew nothing would happen overnight, but she hoped MPs would consider boosting St John funding.

The Ministry of Health and ACC funded about 72% of the emergency ambulance service. The rest was made up from part-charges, third-party contracts and fundraising.

Mr Bradley believed the Government needed to increase its contribution.

St John’s four-year contract expires on June 30, 2021, and he was confident a more sustainable funding model would then be introduced.

"St John is seeking a contract that moves us closer to being fully funded over a five-year phased approach, and while we appreciate the generosity of New Zealanders in supporting our ambulance service, we do not believe that we should be relying on generous — but unpredictable — donations to cover the core day-to-day running costs of an essential service."

Ms Leary said St John did a fantastic job in her electorate.

She wanted fit-for-purpose services that provided the best outcomes for those needing emergency medical services.

She will present the petition to Parliament on Ms Latta’s behalf.

As St.John don't operate Ambulance services in Wellington region (WFA) what did it cost to send to the 2 Intensive Care Paramedics to Wellington, the Ambulance and the cost to cover what you would expect to be front line rolls.
Also of note, Mr Quin is Chair of the Central North Island ambulance officer union.
This once again demonstrates St John lack of control of spending which is the real issue. Hopefully the petition will encourage a detailed examination of St John spending and the effect it has on provision of its core function for which it receives funding.