Stevenson late for council most often 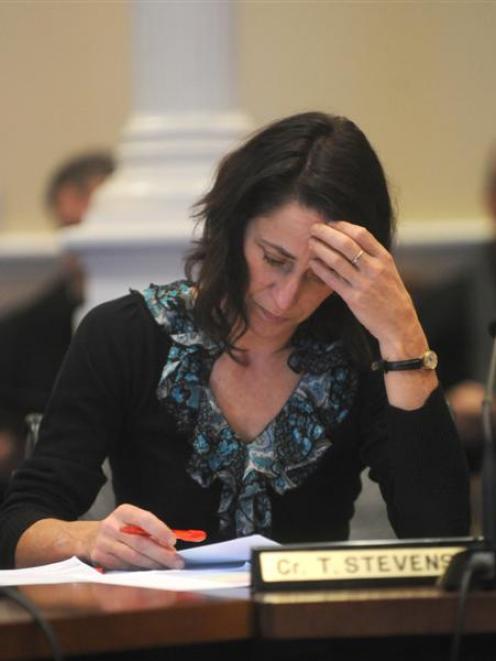 She said "sorry I was late" after taking her seat, but gave no explanation, and her 62-minute delay was recorded in the minutes of the June 2 meeting.

She has arrived late, without a prior apology, for 25 council and committee meetings this term.

The next worst offenders are Crs Richard Walls and Michael Guest, with 14 and 13 late arrivals without prior apologies, respectively.

Most other councillors are in single figures.

The Otago Daily Times count did not include the late arrivals of those who apologised in advance - something Cr Stevenson has done just once this term - she was 15 minutes late arriving for a council meeting on August 18 last year.

All Cr Stevenson's other late arrivals were without prior apology.

Most delays ranged from one to 15 minutes, the figures showed.

Asked for an explanation this week, Cr Stevenson felt a comparison with other councillors was unfair.

"I have a bad habit of being a little bit late, but it's a habit I'm trying to break.

"You have measured me being late, but what about my attendance in meetings? . . . I turn up to more meetings than other councillors.

"I would [have] one of the highest attending rates of councillors," she said.

She could offer no explanation for arriving more than an hour late for this month's annual plan meeting when asked.

Cr Stevenson's lateness prompted Mayor Peter Chin to inquire, during a break in the June 2 meeting, whether she had got lost on the way to the council chambers.

Asked to comment by the ODT yesterday, deputy mayor Syd Brown said he believed all councillors had a responsibility to be punctual unless other council business or health problems prevented them from attending meetings.

"There's a responsibility when you are elected to attend meetings on time and stay for the whole meeting. It's a commitment to actually represent the city.

Cr Walls acknowledged he was the second-worst offender, but argued his late arrivals were usually only by "two or three minutes" and were often because of other council business.

His council responsibilities included chairing the finance and strategy committee and two subcommittees, sitting on other subcommittees, advisory and liaison groups as well as chairing Dunedin International Airport Ltd and having an involvement with trusts outside the council.

Cr Stevenson, first elected in 1992, holds no chairman or deputy-chairman positions on any council committees, having lost the position of deputy chairman of the community development committee at the start of this term.

Cr Guest could not be contacted.