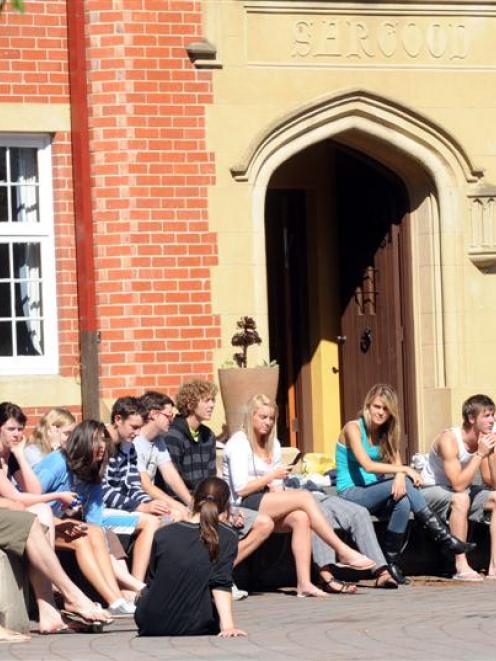 Selwyn College students enjoy the sunshine in their quad. Photo by Peter McIintosh.
Parents of first-year students leaving home for the first time can breathe easy about them behaving and eating their greens in a hall of residence.

Established in 1893 and known for its intense rivalry with Knox College, it was also one of the most popular colleges in the city.

With 3.5 applications a bed this year, warden the Rev David Clark had the task of hand-picking the 160 students who would spend the next 10 months under the same roof.

He enjoyed being able to select a good mix of students from public and private schools, urban and rural areas and from all over the country, he said.

Over the year they became a tight community and the small number allowed them to all get to know each other.

Friendships formed at Selwyn often lasted a lifetime, he said.

While a tennis court, squash court, pool table, music room, video games and SkyTV were available to help students relax and socialise, many competitions and activities strengthened their friendships.

One of the well-known activities was the Selwyn Ballet, open to any male student at the college.

"They take it very seriously," Dr Clark said, to ensure they looked professional for their audiences.

The Leith Run was known as an entertaining event which would be held tomorrow.

It involved Selwyn students carrying a bath tub down the Leith while ex-residents threw flour bombs and eggs at them.

Another important part of the family mentality was meal time.

"Eating together and sharing every day is really important to us," Dr Clark said.

He was present at each meal where notices about college life were shared.

He placed importance in personal interaction between college staff and students.

Selwyn College prided itself on its changeable menu which appeared to keep students happy.

Dr Clark also believed the college spent more than the majority of other halls on food and its food safety and standards put it in a class above the restaurant trade.

Food service manager Adele Spies said they did not operate on a seven week menu, instead it was made up week to week, and focused on seasonal produce which was healthier and cheaper.

To mix things up during the year, themed evenings would be organised on Halloween and St Patrick's Day for which suppliers would offer items such as green bread and pies.

The dining hall would be decorated and the students would dress up, she said.

Parents could rest easy at night knowing that, aside from all the socialising, their offspring had plenty of academic encouragement from the college through designated study rooms, computer suites and in-house tutorials run by ex-residents.

"Part of being at college is having a complementary learning environment," Rev Dr Clark said.

Discipline was also available with senior residents, sub-wardens, a chaplain and, of course, the warden available to guide and support students.

While his students were "quite mature, independent and self confident", if any of them strayed too far from the path, appropriate guidance was available.

Security was also a factor in keeping Selwyn students safe at night and wayward students out.

After all, it was situated on the main route between the Gardens Tavern and town and, on a busy night, about 800 people could be gathered outside its main doors, he said.

Each student was issued a security key which gave them access to the college once it was locked late in the evening.

From what the Otago Daily Times observed of set meal times, cleaners and security teams, a hall of residence may well be the best place to house the city's students.