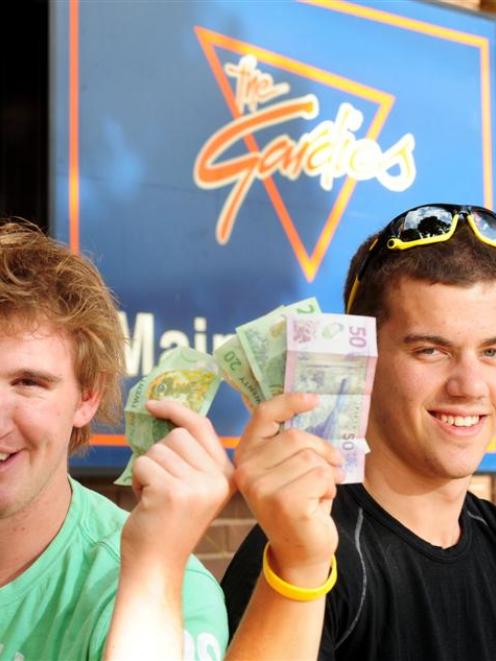 University of Otago students and flatmates Tom McKnight (left) and Blake Luff are looking for investors to complete their plan and buy "the Gardies" and keep running it as a student pub. Photo by Craig Baxter.
Upset at the possible demise of Castle St student bar the Gardens Tavern, three Dunedin students have come up with a scheme to save it.

Flatmates Blake Luff, of Alexandra, Nathaniel Parker, of Mangatainoka, and Tom McKnight, of Geraldine, say they are three of thousands of Dunedin-based students who do not want to see the Gardens Tavern - the Gardies - shut down.

The 19-year-old second-year University of Otago students sought advice on how it could be saved.

It came yesterday from former Otago student and now television personality Marc Ellis, who suggested they form a company and convince 200 people to each invest $2500.

From that capital, the company could raise a loan for the rest.

It then needed to appoint a board of directors and start making the pub profitable.

In an email to Mr Luff, Mr Ellis said he was also making "a few inquiries to see if we can't get a team together to buy the pub and keep the doors open ..."

Students had made clear they wanted to see the hotel continue, Mr Luff said.

"We don't want to see it go, so we're trying to do something about it.

"The last thing we want them to do is turn it into Campus Watch headquarters, or something."

Being owned by students would have a positive effect on business and it should not take too long to repay the loan.

The present proprietor of the hotel, Peter Innes-Jones, last week told the Otago Daily Times he was selling because it was becoming harder for the hotel to make money, but he hoped someone would buy it and run it as a pub.

It would be "fantastic" if they were students, he said.

Mr Luff and Mr McKnight said they were not naive and that it would take a lot of work, but they had enthusiasm and ideas about how to make the business profitable.

That a group of 21-year-olds had formed a company and bought another student pub, the Captain Cook Tavern, and made a successful business out of it had also inspired them, Mr McKnight said.

"I think we can definitely get enough investors."

The pub site, with a rateable value of $1.025 million, is being offered for deadline sale, which closes on April 14.