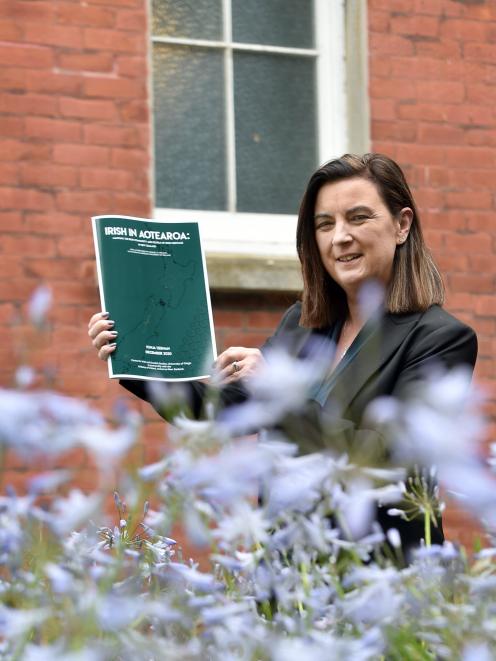 Prof Sonja Tiernan, co-director of the University of Otago Centre for Irish and Scottish Studies. PHOTO: PETER MCINTOSH
A national study, compiled by a Dunedin academic, shows many strong historical and cultural links between New Zealand and Ireland.

"It highlights the bonds, from the point of view of the countries and their make-up," Prof Sonja Tiernan, co-director of the University of Otago Centre for Irish and Scottish Studies, said yesterday.

Prof Tiernan, who compiled the study, titled "Irish in Aotearoa", said both countries had a similar population size, similar industries, many areas of shared history and interests, and a shared desire to maintain indigenous languages.

Commissioned by the Embassy of Ireland, and funded by the Department of Foreign Affairs, Ireland, the study was the first of its kind in this country.

It was "a starting point for understanding the ongoing cultural and economic impact Irish have in New Zealand, while looking at their historical contribution", Prof Tiernan said.

The study will be formally launched on Sunday at 2pm, at Toitu Otago Settlers Museum, at an event attended by Irish ambassador Peter Ryan.

The study included a foreword by President of Ireland Michael D. Higgins, and has what was believed to be the first translation of one of Ireland’s most important documents, the Proclamation published in Easter 1916, into te reo Maori.

Mr Higgins said that "few nations come together as readily as ours, sharing as we do numerous similarities in respect of values, experiences, sensibilities and outlooks on many of the global challenges that together we face from across the world".

The study said that the number of New Zealanders or Irish heritage had been estimated at more than half a million, but there were no statistics to prove this.

Eamon Cleary Chair of Irish Studies, Prof Tiernan said that while New Zealand had strong historical ties with Ireland, its recent relationship was dynamic, and based on reciprocal trade and migration opportunities.