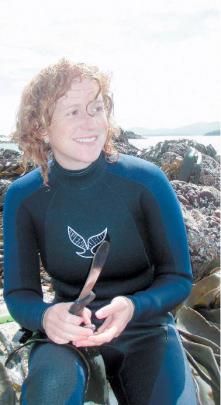 In the thick of it: Bull kelp holds secrets to understanding more about animal and plant dispersion, researcher Ceridwen Fraser says. Pictures: Supplied 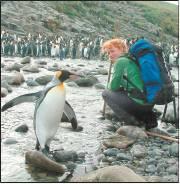 Royal subject: A king penguin on Marion Island leaves its colony to check out Ceridwen Fraser. 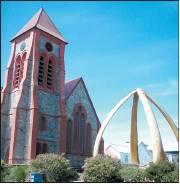 Long history: A whalebone arch outside a church in the Falkland Islands. 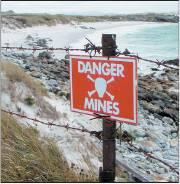 Added hazard: Unexploded mines left from the Falklands War are still a danger on some beaches.

Bull kelp may have a lot to tell us about the geographic distribution of plants and animals around the globe, University of Otago's Ceridwen Fraser says.

Fighting surging seas to collect bull kelp from the coastline of far-flung sub-antarctic islands is all grist to the mill for the 29-year-old zoology department doctoral student.

‘‘It's an exciting area of research,'' Miss Fraser said.

‘‘We're using really modern techniques to look at things even Darwin was talking about - why things are where they are on a global scale.''

Earlier this year, she was in the Falkland Islands.

Last year, it was the Marion Islands in the southern Indian Ocean.

She has also collected bull kelp from off the New Zealand coastline and Gough Island, southwest of South Africa.

‘‘It's fine doing that in New Zealand, because you can choose a calm day. But when you only have a three-week window each year and you're on an island facing 4m to 7m swells [at sea] and you're down to the last few days, you start to panic a bit towards the end because that's a lot of time and money to throw away and not get any samples.''

The research involves cutting bull kelp off at the root and analysing the genetics of the seaweed and the fauna that live in its base.

Many of the fauna species - sandhoppers, crabs and worms - do not have a larval stage in their life-cycle.

‘‘They don't disperse, so they could only have reached there by floating.''

If the seaweed and its animal passengers are closely related to samples taken elsewhere around the globe, it will have important implications for theories about plant and animal distribution.

Moving in an eastward direction is the Southern Ocean, a powerful non-stop current that circulates around the Antarctic and connects with the globe's other oceans.

There are an estimated 70 million pieces of kelp floating in the world's oceans at any given time.

‘‘If just one of those hits a far shore every year, that's quite a lot for gene flow in an evolutionary sense.

‘‘Is dispersal as important a factor as the break-up of the continents in explaining why animals and plants are where they are?''

With results pending publication, Miss Fraser will not give a conclusive answer.

The research has consumed her life for the past few years.

‘‘I love the sub-Antarctic and I'm completely absorbed by bull kelp now.''

The seaweed also finds its way into her cooking - stews, stir fries, hummus, omelettes and even kelp chocolate cake.