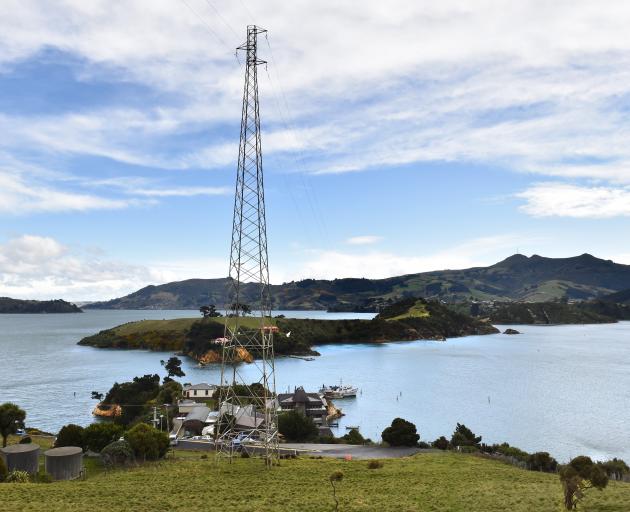 Power lines crossing Otago Harbour, between Port Chalmers and Portobello, will be removed and replaced with submarine cables. PHOTO: GREGOR RICHARDSON
An ageing overhead power line and submarine cable in Dunedin will be revitalised and locals are "delighted".

Aurora Energy announced this week it will install two new submarine cables in the harbour between Port Chalmers and Portobello.

Work programming and delivery general manager Mark Pratt said the Harbour Crossing upgrade, which is expected to cost between $5million and $7million in total, was a major project for the local community.

Quarantine Island and the Portobello community were supplied power by overhead lattice towers that were installed more than 60 years ago and were due for replacement.

“As well as replacing ageing assets, this project addresses public safety risks associated with end of life towers and conductor and enables continuation of a secure electricity supply to Portobello by replacing a 1947 submarine cable," he said.

The submarine cables would also improve the view along the stretch of coastline, and ensure safe passage for ships and Otago Regional Rescue Helicopters, which use the harbour route during bad weather.

The existing lattice towers and overhead lines would be removed and land on both islands would be reinstated to its natural habitat.

Aurora worked with the local community and key stakeholders to come up with a solution, instead of replacing the lattice towers, he said.

Quarantine Island keeper Meghan Hughes was "utterly delighted" and said the removal of the lattice towers would better suit the island’s landscape.

"We are also hoping it will improve the habitat for the birds who come and roost on the island ... we are so happy."

Construction would take place in stages between October this year and October 2021.

Good news. This is a better plan for the future than replacing pylons and cables and the existing submarine cable across the harbour.

It is a cost effective way of providing power to the Peninsula.

As a bonus Kamau Taurua (Quarantine Island) and Rakiriri (Goat Island) and the harbour habitat will be improved or restored.