Success of cup coup for student 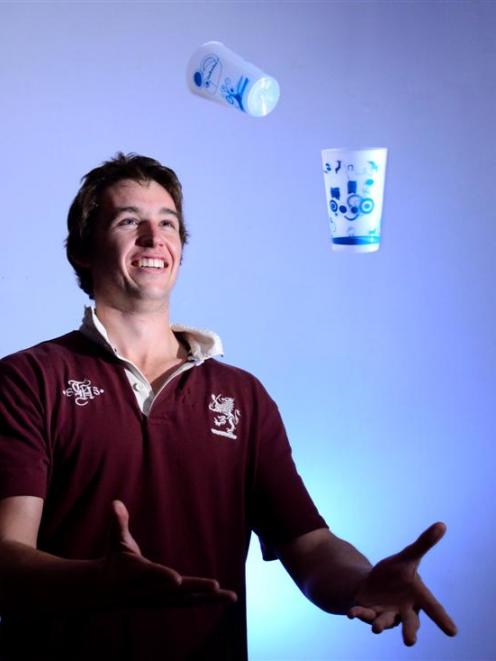 Ryan Everton juggles with two examples of the Globelet, a reusable plastic cup. Photo by Gerard O'Brien.
The winner of this year's Audacious Business challenge for Otago University and Otago Polytechnic students hopes his winning product will change people's mindsets about reducing waste.

University of Otago law student Ryan Everton (20) picked up $8000 for developing the Globelet, a reusable plastic cup. Mr Everton already has a commission with Forsyth Barr Stadium and a client in Australia.

The Audacious challenge is a joint initiative by the Dunedin City Council, the University of Otago School of Business and Otago Polytechnic to encourage tertiary students to pitch business ideas.

Mr Everton's product carried an important message about reducing waste, and this was part of the reason he won, he believed.

"It [the Globelet] lasts up to 1000 washes in a commercial dishwasher, so instead of having single-use waste that you throw into a bin or recycling, it can go through a dishwasher [and be used again].

"It's about changing the mindset of people," Mr Everton said.

He also credited the support of the people around him, who worked from the same building in Bond St, for pushing him to see his idea through to fruition.

Winning the challenge meant he could start "paying some of the bills" and move forward with his next objectives without as much stress.

At the moment he was working on a plan in which the cups would be given to backpackers who came into New Zealand from December.

This was part of a promotion of tap water to tourists, with a QR code on the cup linking users to information about the closest water sources.

David Booth and Harrison Uffindell's Meatmail, a meat delivery service for students in Dunedin which already had 86 customers, picked up second place in the challenge.