New Zealand was the first nation in the world to grant women the right to vote in 1893 and rival groups yesterday each claimed the suffragettes of nearly 130 years ago would have been on their side now.

No-one was arrested as a result of the protests, but police said an assault complaint was received during the day.

"Police have received an assault complaint which we are making inquiries into," a police spokeswoman said.

"No-one was seriously injured and there have been no arrests."

Transgender-positive counter-protesters outnumber the gender-critical feminists on the other side of the street at the Octagon on Suffrage Day yesterday. PHOTOS: GERARD O’BRIEN
At issue between the protest groups were self-identification provisions in the Births, Deaths, Marriages and Relationships Registration Bill, which passed its second reading last month.

Under the Bill, people would no longer have to go through the Family Court or show evidence of medical treatment to change the sex on their birth certificate.

Some groups are worried what the changes might mean for women-only spaces.

Others say the changes will not threaten the rights of anyone, but matter for people who are transgender, or other gender minorities.

On one side of the Octagon, Tracey Crampton Smith, one of about 10 protesters, said suffragettes who originally won women the vote would have supported her side’s campaign of "sex-based rights". 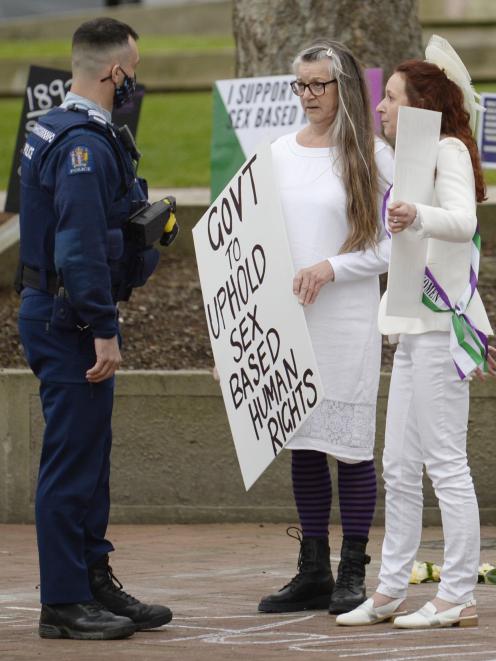 Tracey Crampton Smith (centre) and Jennifer Scott are spoken to by police after an alleged assault of a counter-protester. The women were part of a group of protesters who used Suffrage Day yesterday to voice their concerns about a Bill before Parliament they say will erode women’s rights.
She had no idea what the much larger crowd of about 60 protesters on the other side of George St were protesting, because suffragettes fought for female rights, "and trans women have nothing to do with it", she said.

On the other side of the street, Environmental Justice Otepoti organiser Scout Barbour-Evans said the suffragettes were progressive thinkers who would have joined the younger crowd of about 60 protesters.

"We are here to celebrate women’s suffrage in a way that actually gives honour to the event and the history, because that is important history.

"But just as there was trailblazing to forge that aspect of history, we are having to trailblaze now to make sure that we are also afforded equal human rights."

In a video they posted to social media yesterday, a young protester can be seen telling a police officer they were assaulted.

In the video the police officer can be seen ushering a group of protesters back to one side of the Octagon.

Submissions closed for the Inquiry into Supplementary Order Paper 59 on the Births, Deaths, Marriages and Relationships Registration Bill last week.