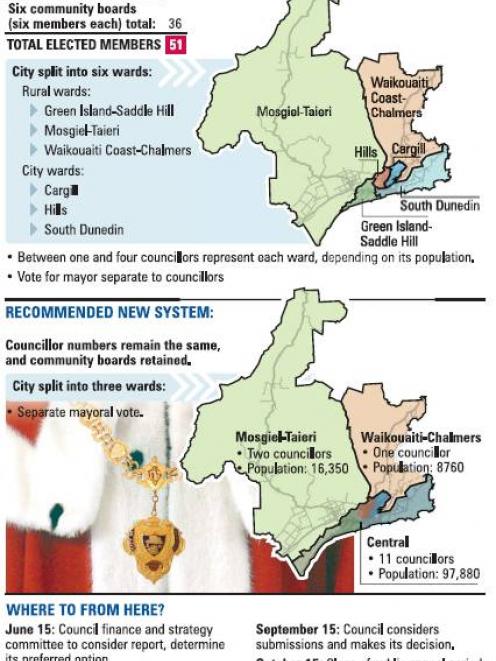 Click on graphic to enlarge.
Substantial changes to Dunedin's voting method could see its system of wards scrapped in favour of a "super ward", with 11 councillors representing the urban area, and three representing two rural seats.

The change would mean most Dunedin voters would no longer be restricted to voting for three or four councillors in their ward, and having no say on the rest.

Instead, the Dunedin central area, for instance, with a population of 97,880, would vote for 11 of 14 councillors.

It would also mean candidates would have to campaign city-wide at elections, rather than trying to gain votes in a limited ward area.

[comment caption= Is the "super ward" a good idea?]Concerns about the change yesterday ranged from an extra cost for campaigning to inequity for rural voters, who would have only one or two councillors to vote for.

Despite those concerns, there appeared to be support for the proposal.

If the recommended option wins favour, it could result in major changes to the make-up of the Dunedin City Council, an outcome that could prove popular with critics of recent council decisions, such as the stadium.

He may have kept his seat under the new system.

Another possibility is candidates taking advantage of a larger pool of councillors to form political groupings, as in the past when Labour or National put forward candidates.

Councillors will vote at an extraordinary meeting on Monday on their preferred option for representation, and a majority have expressed support in the past for an amalgamation of the city wards.

The recommendation follows a representation review required of local authorities at least every six years under the Local Government Act.

Councillors were presented with three researched options: a ward system similar to that in place; a system with no wards at all; and, the preferred option, a mixed system.

The mixed system proposal included the Green Island-Saddle Hill ward, as far south as Brighton and Taieri Mouth, in the central ward, with the area's community board noting it had more affinity with the Dunedin metropolitan area than with Mosgiel.

Responses to public surveys were mixed.

In the mail survey, 201 of 1000 surveys sent to random addresses on the electoral roll were returned, with 41% supporting the ward system, 34% wanting no wards, and 24% the mixed system.

A survey in the council's City Talk magazine had 230 responses, with only 12% in favour of wards, 48% in favour of no wards, and 34% supporting the mixed system.

Mr Chin said yesterday the council would determine its position on Monday, but that could be subject to change following consultation, and there was an appeal process if people were still unhappy with the result.

He said there could be a change to the way candidates campaigned, focusing on the whole city, rather than their wards.