A group of Wellington artists is in Dunedin adding colour to the city through street art. Arts reporter David Loughrey takes a look.

A visit by a Wellington team of artists has added splashes of colour across inner Dunedin and additions to the city's street art trail.

The artists from Honey Badgers Creative Studios have been hosted by the Dunedin Street Art Trust and Geeky Gecko Backpackers, and are completing works in Vogel St, Roberts St, at the Daily Coffee Co in Princes St and in the Laneway Cafe in Bath St.

She said she did street and other art in Wellington, and wanted to create "something bright, something vibrant'' for Dunedin. 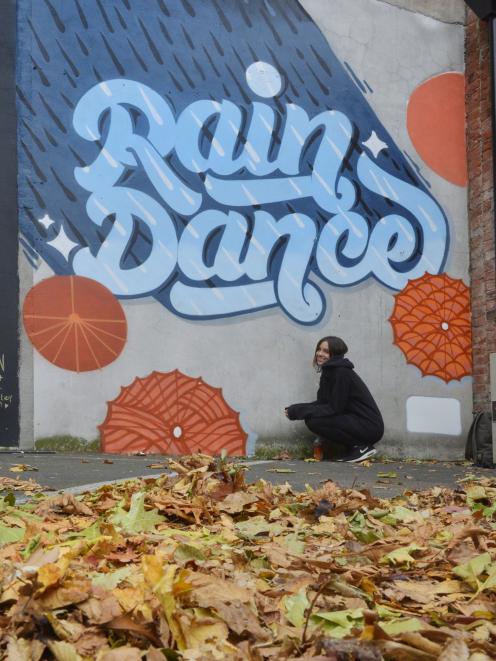 Her work, "blackletter gothic calligraphy'' was sometimes legible, sometimes not, and explored the form of the letter.

There were sometimes messages in her art people could interpret, and in her Vogel St work there was a reference to the Billy Joel song The Longest Time.

Nearby, behind the Vogel St Kitchen, Holly Ross was working on Rain Dance, finishing parasols on her artworks, enhancing an area that is amassing a strong showcase of street art.

Dunedin Street Art Trust member Justin Cashell said the studio approached the trust to say the artists were coming to Dunedin for a group exhibition.

The trust helped secure walls for them to paint while they were here.

That was not difficult nowadays, as the street art scene had blossomed in the city.

"Everyone was very open; we've got a really good reputation for doing things professionally, and doing all the work behind the scenes.''

The trust was sometimes approached by business owners who wanted to offer their walls, and sometimes the trust approached people if the trust or an artist saw potential in a wall.

Mr Cashell said it was good to get some colour into Roberts St, and Plato restaurant at the end of the street had indicated it wanted its wall done next.

"Things just snowballed from there,'' he said.

The artists had "a really nice time'' in the city.

"It's not every day you get approached by an entire collection of artists who are keen to come to your city.''

Finance for the works had come through working with building owners and sponsors and using funds from a street art auction the trust held last year.

Mr Cashell expected the works to be finished by today.