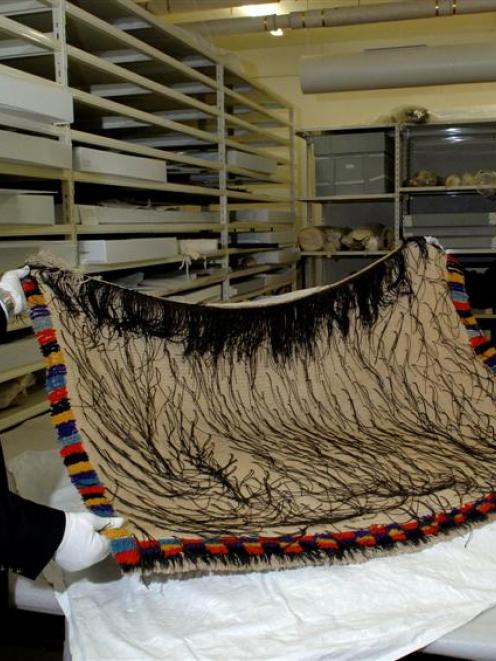 Shanghai Museum vice-directors Prof Chen Kelun (left) and Prof Li Zhongmou examine a Maori ceremonial korowai cloak at the Otago Museum yesterday as preparations continue for a major exhibition, to be staged in China. Photo by Linda Robertson.
A trail-blazing Otago Museum exhibition is likely to be viewed by up to half a million people in Shanghai, later this year, organisers say.

Museum officials yesterday said the forthcoming show, which opens at the Shanghai Museum on July 21, will be the first exhibition of Maori taonga (treasures) to be displayed at a museum in China.

The show, which is likely to include about 350 Maori artefacts from Otago Museum collections, is also by far the largest overseas exhibition organised by the Otago Museum in China.

Prof Chen said Chinese visitors would be "very interested" in the exhibition, as they were keen to understand more about Maori culture, given a possible ancient relationship, shown through genetic research, between Chinese and Maori.

The Shanghai Museum presentation would highlight the South Island and Dunedin, and he believed people who saw the exhibition would be inspired to come to visit New Zealand, and visit Dunedin, as tourists.

Exhibition co-curator Associate Prof John Broughton said it was "exciting" to realise the "amazing collections of taonga" held within the museum would soon have an international audience.

Otago Museum chief executive Shimrath Paul said the show was trailblazing not only for the Otago Museum but also for cultural links between Dunedin and its Chinese Sister City Shanghai.

The exhibition would have "significant impact" this year, help strengthen relationships between the two museums and lead to further initiatives.

Six years in the planning, the show reflected a close, 15-year relationship between the Shanghai and Otago Museums, Mr Paul said.

It is the Shanghai Museum's first special exhibition this year, one of four.

The Shanghai institution attracts about two million visitors a year, and is China's second most frequently visited museum, behind the Palace Museum, in Beijing, which is visited by more than three million people each year.