By Emma Perry
0 Comments
A Navy vessel departing Dunedin today will be a test of teamwork for the New Zealand Defence Force.

HMNZS Canterbury, docked at the Fryatt St Wharf yesterday. PHOTO: PETER MCINTOSH
HMNZS Canterbury, which arrived on Wednesday, is embarking on Operation Endurance, to the Auckland and Campbell Islands, with a contingent of army, navy and air force personnel. 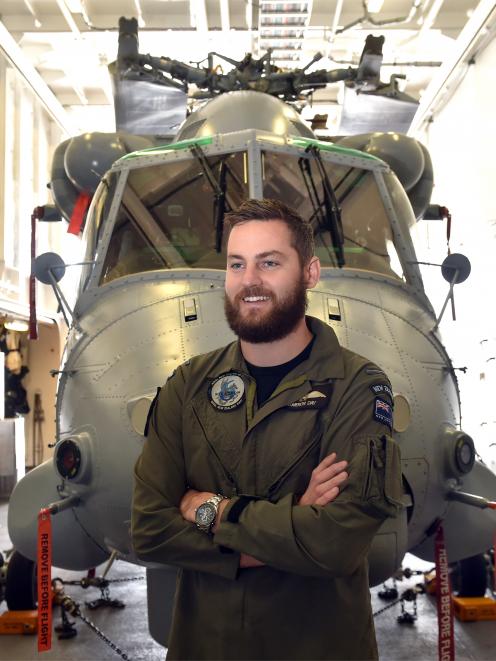 Excited to be embarking on a new adventure on a navy ship down south with the Seasprite helicopter is Royal New Zealand Air Force Flying Officer Cameron Day, of Alexandra. PHOTO: PETER MCINTOSH
Royal New Zealand Navy Commander Martin Walker said the mission would assist the Department of Conservation and the MetService to control pests on the island and forecast weather.

"We all get along well, so there shouldn't be any issues I don't think."

A total of 250 personnel would be on board for the two and a-half week journey.

Royal New Zealand Air Force Flying Officer Cameron Day, who was on exchange in the navy, said he had wanted to be a pilot since an air force pilot had visited Dunstan High School, in Alexandra, where he attended school.

The Invercargill-born 27-year-old said he was enjoying being docked in his home region.

"My dad came from Alexandra to visit me, which was pretty cool. I got to show him around the naval vessel.

"He was pretty amazed. It's always bigger than you expect."

It would be exciting to fly a helicopter which differed from air force helicopters, he said.

Canterbury was due to leave Dunedin at 6.30pm today.