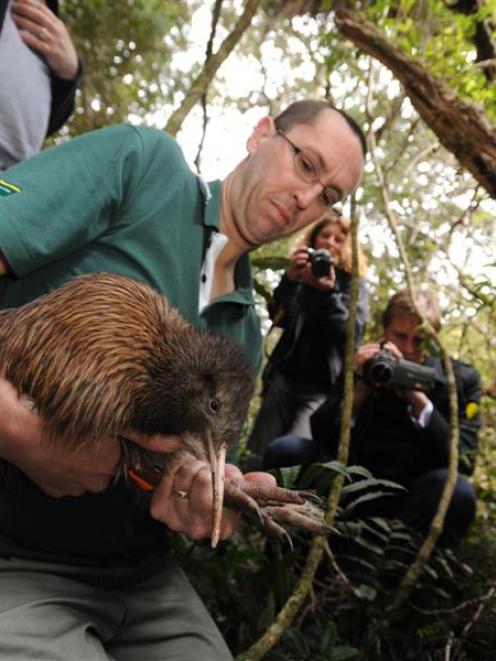 Department of Conservation Haast Tokoeka team leader Neil Freer prepares one of 10 tokoeka kiwis for release to its new home at the Orokonui Ecosanctuary yesterday. Photo by Peter McIntosh.
For such a momentous occasion, there was little fuss.

When 10 Haast tokoeka kiwis were lifted from small wooden boxes in the middle of the Orokonui Ecosanctuary yesterday, there was scant time to admire them before they scuttled to hide in holes beneath dead trees.

The chances of spotting New Zealand's rarest species of kiwi, the Southern brown, on the outskirts of Dunedin have now more than doubled with the arrival of the 12-month-old birds yesterday. They will join six kiwis released last October - the first to roam Dunedin forest in 140 years.

The 10 juveniles were brought to the ecosanctuary under an agreement between the Department of Conservation and two runanga: Makaawhio, of South Westland, the guardian of Haast tokoeka, and Kati Huirapa Runaka ki Puketeraki, of Karitane, which is fulfilling the guardian role on behalf of Te Runanga o Makaawhio.

Four of them hatched naturally in their South Westland habitat, and were taken as chicks when they were about a week old.

The other six came from eggs recovered from the South Westland forest and artificially incubated.

The birds have been given names reflecting their natal locations, including Thirsty Ridge, Heavenly Hindley, Upper McTavish and Slip Pair.

Orokonui Ecosanctuary Trust chairman Neville Peat said the transfer of the tokoeka was a consolidating moment for the project as well as for the conservation of the country's most endangered species of kiwi.

"We are thrilled that Orokonui has been selected as a breeding site for this rare kiwi.

"In its natural habit in the South Westland mountains, tokoeka are threatened by predation, despite the best efforts of Doc to remove stoats and other predators.

"The birds we received a year ago are known to be thriving at Orokonui, with impressive weight gains recorded over the past year.

"Even more exciting is the attempt on the part of two pairs, despite their young age, to set up territories in preparation for breeding."