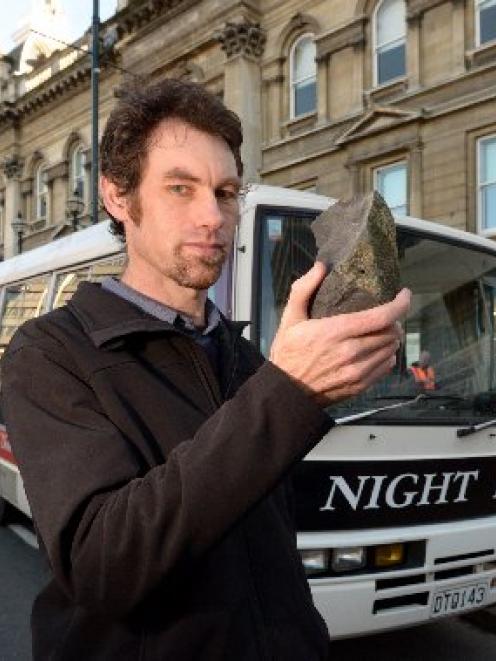 Night Bus Dunedin operator Andrew Rutherford with the rock he says was thrown through the window of his bus while passengers were on board. Photo by Gerard O'Brien.
A rock hurled through the window of a Dunedin night bus - while passengers were on board - is the latest sign of escalating tension between the operator and some city taxi drivers, it has been claimed.

Andrew Rutherford, of Dunedin, said he had faced ''threats, intimidation and violence'' since he launch his Night Bus Dunedin service from the Octagon last month.

One taxi driver had made a throat-slitting gesture, while another had warned him: ''There's 200 of us and one of you,'' he said.

In the most serious incident, a rock smashed through the back window of Mr Rutherford's bus in High St about 5am last Sunday.

Some passengers reported seeing the offender ride off on a scooter, and Mr Rutherford said police had told him the scooter had been traced to the home of a Dunedin-based taxi driver.

''It could have been manslaughter. It was a rock sailing past a passenger's head,'' Mr Rutherford said.

Dunedin road policing manager Senior Sergeant Phil McDouall could not confirm the scooter owner was a taxi driver, but said an investigation was under way, and cautioned both sides to operate within the law.

''I know some taxi drivers are a bit annoyed with him, but he's ... operating a legal service.''

Mr Rutherford's service operated from a P5 park in the upper Octagon - right next to a night-time taxi rank - ferrying paying passengers from the Octagon to their homes in his 20-seater bus.

However, he operated only from about midnight to 5am on Sundays, when queues of people waiting for taxis were longest.

He charged about $3 a km but declined to say how much he earned each night.

However, some taxi drivers were upset Mr Rutherford was also using their upper Octagon taxi rank, next to the P5 space, without authorisation.

Tensions have been escalating. Taxi drivers had put road cones out to block access to the P5 space, and used their taxis to block his bus, Mr Rutherford said.

City United Taxis manager Nicola Darling declined to comment, saying she was still ''getting to the bottom'' of the situation.

Dunedin Taxis manager Simone Green said her drivers were annoyed by Mr Rutherford's use of the taxi rank, and she had referred their concerns to NZTA.

''The fact is it's a massive investment for taxi drivers to be in the industry ... To have anybody that cuts into that without any proper jurisdiction just isn't appropriate.''

The P5 was available for any vehicle but Mr Rutherford's bus could not use the taxi rank, and he had bus stops available elsewhere in the Octagon, Mr Minnema said.

Mr Rutherford said he had used the taxi rank when vehicles parked in the P5 space for ''hours'' at night, without enforcement action by the council.

Despite that, Mr Rutherford said use of the taxi stand was a ''parking issue'' comparable to a member of the public overstaying on a timed meter.

''They [taxi drivers] see that area as their territory, and they're going to want to defend it by whatever means possible.''