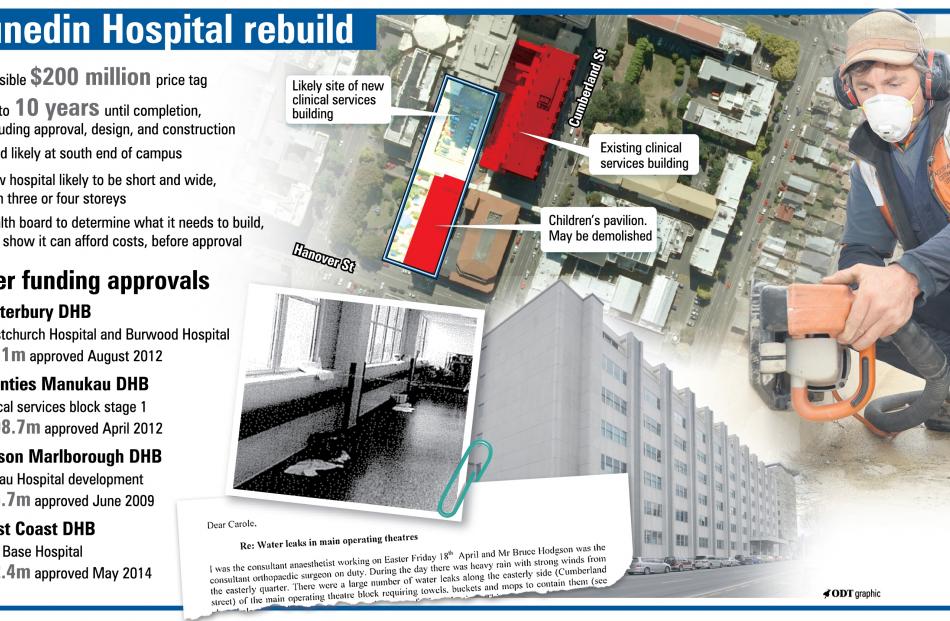 Everyone agrees the run-down Dunedin Hospital clinical services building needs to be replaced or completely refurbished. But the go-ahead for the project depends on the Southern District Health Board showing it can afford costs that go with the price tag. Health reporter Eileen Goodwin looks at the issues.

As rain lashed at the side of Dunedin Hospital on Good Friday, a 13-year-old boy with a fractured spine lay there waiting for surgery.

The boy had suffered an unstable fracture to his thoracic spine.

Along the walls of the operating theatre block, hospital staff deployed buckets and towels, as the rainwater seeped inside and on to sterile surgical equipment.

Patient safety was threatened. Surgery would have to wait.

Details of the incident were spelled out in a letter from anaesthetist Matthew Jenks and orthopaedic surgeon Bruce Hodgson to chief executive Carole Heatly, released under the Official Information Act.

The doctors' letter included a photo of the buckets and towels. No doubt it helped jolt senior management from its insistence the leaks could be managed and patched.

Commissioned in 1967, the seven-storey clinical services building needs replacement or major refurbishment, until which time as little as possible was to have been spent on it. The April downpour proved a wake-up call, and $1.75 million has been allocated to fix the building's leaks.

The unwelcome and unplanned spending perfectly illustrates the board's bind, its financial catch-22. Government approval for funding to rebuild - which could be $200 million or more - depends on the board showing itself on a path to surplus so it can afford to service the $20 million a year or so interest and depreciation.

While there is a sense of inevitability about replacing the ageing infrastructure, the board, already weary from years of cost cutting, has to show Wellington it has cut still further.

Old arguments between Wellington and Dunedin that the South is chronically underfunded by population-based funding, the formula used to dole out health dollars, have been dropped and the board is urging staff that further cuts are essential to affording a new hospital.

Acting health board chairman Tim Ward told the Otago Daily Times the board will make cost reductions ''because we're going to have to - it's as simple as that''. The Invercargill accountant rejects suggestions the recent drive for yet more cost cutting is straining the board's relationship with doctors and nurses, some of whom do not accept cuts should be the cost of essential infrastructure.

Support from clinical staff will be important in the design phase of the hospital, and to cope with disruption during construction.

Most crucially, sources have told the ODT there are no indications rebuilding spells a downgrade of high-level hospital services in Dunedin. Memories are still strong of up to 10,000 people marching in Dunedin in 2010 over the possible loss of neurosurgery, and there is perhaps little political or bureaucratic enthusiasm for pushing southern health services to bigger centres such as Christchurch.

The board's finance head, Peter Beirne, during an interview with the ODT, was reticent about the early planning stage of the new hospital,

emphasising it is at an early stage. All told, the new hospital is eight to 10 years away.

Refurbishing the existing building is possible but unlikely - it would create a huge logistical headache for a working hospital, and its tall, thin shape is not in keeping with modern hospital design. It might be refurbished as office space.

The most likely scenario at present is rebuilding on the south side of the hospital precinct, adjoining the ward block. The children's pavilion might be demolished to make way.

''The fit to the site is an interesting question. That is a problem with any inner-city site,'' Mr Beirne said.

The new hospital would be short and wide, and only three or four storeys, Mr Beirne said. Like-for-like replacement of the building - which housed surgical theatres, the emergency department, and radiology - is about $200 million (including equipment). Whether the final amount granted is more or less remains to be seen.

A short, wide building would reduce parking space, and that was an issue to be resolved. The construction period of up to four years would involve major disruption and parking issues.

But first the board has to determine exactly what it needs in a future involving more older patients with many health conditions. Long-term management of conditions, rather than one-off events in people's lives, will feature more. A planning exercise is being run to look at the whole southern region, which will include public consultation.

One of the conditions attached to government funding is looking at the role the private sector can play - and Mercy Hospital confirmed to the ODT it would be interested in a bigger role in Dunedin public sector healthcare.

A staunch critic of the health board, senior doctors' union head Ian Powell says the board neglected to maintain the building for many years in an ultimately fruitless attempt to save money. Mr Powell believed rebuilding was now so pressing it would go ahead regardless of whether the September election delivered a National-led or Labour-led government. Until now, there had been some ''not on my watch stuff going on'', but the need was such that neither regime would be able to ignore it.

Some ''scapegoating'' of the board was possible in the process of funding the construction, involving more central control, he suggested. Mr Powell said a downgrade of high-level hospital services would ''always be the fear'', but it was too early to say whether that was a factor. He argued doctors should be involved in all stages of designing the new building, and preferably be the project's public face to explain the issues to the public.

Health Minister Tony Ryall is retiring at the September election, and was not keen to answer fresh questions about the issue. His office referred the Otago Daily Times to previous answers given to the newspaper recently. Then, when asked about the board's ability to fund rebuilding in the wake of its now $13.9 million forecast deficit, Mr Ryall said planning for the project would continue, and the board's deficit was smaller than when National took office.

Approval from the capital investment committee, part of the National Health Board, is required for the various stages of gaining funding approval, before sign-off is needed from two government ministers. The approval stage alone will take a couple of years.