Three incidents off coast near Dunedin 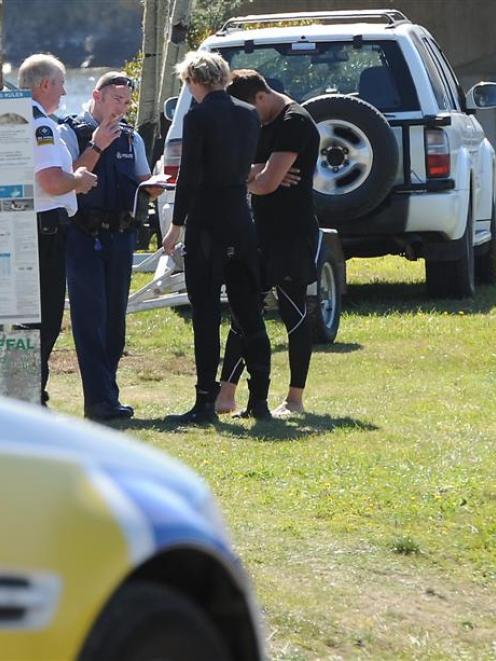 Police and ambulance staff speak to a group of men at Taieri Mouth after their boat flipped when they tried to cross the Taieri Mouth bar. Photo by Craig Baxter.
Three separate maritime incidents south of Dunedin kept emergency services busy yesterday.

In the first incident, police were called to an alert at Taieri Mouth at 12.40pm, following report a vessel had flipped coming back across the bar at the mouth of the Taieri River.

Senior Sergeant Steve Aitken said four men - a male in his 40s and three males in their 20s - ended up in the water.

The men, who had been on a fishing trip, were able to float on top of the boat, which drifted close enough for them to make their way to shore, he said.

They were all wearing lifejackets and none was hurt in the incident.

At 3pm, police and the lifesavers were called to south of Brighton after a boat's engine failed near Green Island at 3pm.

The three divers on board - a 26-year-old and two 25-year-olds - were uninjured and were rescued by the Brighton volunteers in an inflatable rescue boat.

Police were then alerted at 6pm to the plight of a 43-year-old Dunedin man on a 5m cabin cruiser, which had lost power and was drifting south off the coast near Bull Creek, south of Taieri Mouth.

Snr Sgt Aitken said the man had first called a colleague on shore for help about 5pm, but the colleague was unable to locate him and called police.

his pet black Labrador jumped overboard during the tow and was last seen swimming towards shore, Snr Sgt Aitken said.

He said it would have been preferable if the man's colleague had called police immediately.

''Notifying police [earlier] . . . allows more time for us to try and locate vessels in daylight. We were lucky to find the boat prior to it getting dark.''

Search and rescue co-ordinator Senior Sergeant Brian Benn said the incidents were a reminder to boaties to ensure they maintained their vessels and carried adequate communications equipment.