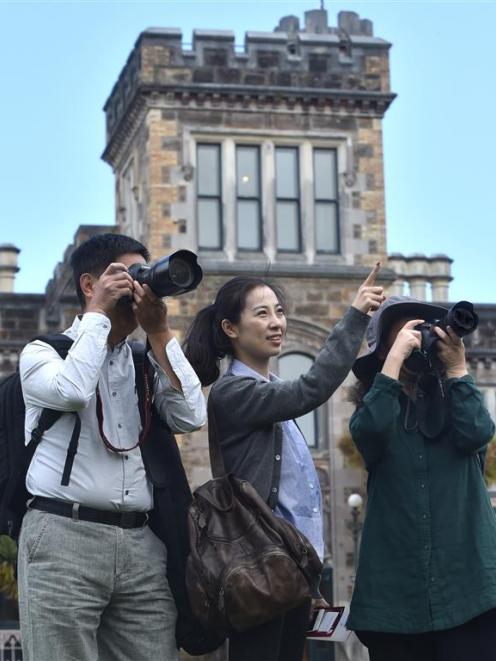 The move comes as Dunedin Mayor Dave Cull says the city needs to plan ahead to ensure the quality of its wildlife experiences and other attractions is not degraded as tourist numbers continue to grow.

Dunedin Railways chief executive Murray Bond said total numbers were up 10.5% in the half-year to December.

But Chinese visitor numbers had jumped 152% in the year to June 2015, and were up another 44% in the half-year to December, with expectations the increase would top 100% again for the year, he said.

"We have got substantial bookings for Chinese New Year ... right through into the end of February or so.''

Larnach Castle director Norcombe Barker said tours were up 14% in the half-year to December, while accommodation was up 24%, which was "quite amazing''.

That growth was being fuelled in part by the growing number of Chinese visitors, up 54% in the corresponding period and now the castle's third-largest market after visitors from New Zealand and Australia.

The growth came as China Southern Airlines delivered the first of an expected 70,000 tourists a year directly to Christchurch from Guangzhou, a city of 8.5million in the 100million-strong Guangdong province.

The first flight of the three-times-a-week, year-round service landed in Christchurch on December16, but Mr Cull said earlier this week the airline was already talking about a daily service.

There was also talk of more routes, from other parts of Guangdong to Christchurch, potentially delivering up to half a million visitors a year to the South Island.

Tourism operators were already preparing for the increases by beefing up offerings tailored to Chinese visitors, ranging from Mandarin language training for staff, to new digital apps and printed material targeting that market.

But Mr Cull, speaking yesterday, said the city's tourism sector needed to do more to prepare for the "tremendous opportunity''.

"The challenging part of it is offering them a quality experience, and language is just part of that; accommodation is another part.

"How do we make sure that with the increased pressure of numbers, that our tourist facilities, experiences and offerings are maintained in quality and are resilient - that they're not overwhelmed by numbers and degraded as a result?''

The city was famed for its wildlife tourism, in particular, but the city's penguin-viewing operations were one area of vulnerability, he said.

What would happen if 50 people a day watching penguins at Sandfly Bay turned into 2000 people?, he asked.

"What effect is that going to have on the wildlife and on the environment? Is the experience still going to be there in two years' time?''

It was a challenge already exercising the mind of Mr Barker, of Larnach Castle, who as chairman of Dunedin Host, also represented the city's tourism sector.

He said the group was working on a Dunedin-wide tourism strategy to identify areas in need of attention in the years to 2025.

The work was based on the Tourism Industry Association's national Tourism 2025 strategy, which aimed to nearly double tourism revenue, from $24billion to $41billion, over the next decade.

Mr Norcombe said for Dunedin to play its part, the focus needed to be on sustainable growth in high-value markets, such as the rising number of independent travellers from China coming south.

"You don't want to destroy what you've got by chasing every last dollar.''

One workshop had been held, attended by about 40 city tourism operators, and a second was planned, to discuss the challenges for Dunedin's tourism sector.

Mr Bond, of Dunedin Railways, said it was "pretty well known'' Chinese visitors wanted to experience the South Island, helped by direct flights, "a big change'' from five years ago.

The challenge would be to spread those visitor numbers over the year, which would help encourage investment in new accommodation, but the city was poised to prosper, he said.

"I actually think places like Dunedin could start outperforming the rest of New Zealand.''