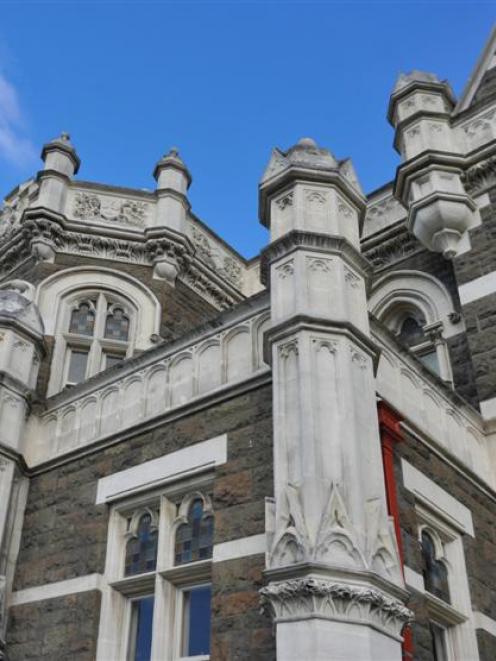 The Dunedin Courthouse. Photo by ODT.
The cost of strengthening Dunedin's historic courthouse more than doubled after engineers completed ''detailed investigations'' into the 113-year-old building, the Otago Daily Times has learned.

The huge price increase came after the investigations commissioned by the Ministry of Justice including core samples from the ground and walls, which showed the preliminary assessment was too optimistic.

The initial engineering report on the building's likely earthquake strength was carried out in 2011, and showed the vast bulk of the court complex was not a high earthquake risk.

That report also estimated the stone clocktower - the only part of the complex it deemed ''high risk'' in an earthquake - could be strengthened for $747,500. It would cost slightly more than $4million to ensure no part of the rest of the complex fell below 67% of national building standards.

Justice Minister Amy Adams told the ODT this month the building needed ''north of $10million'' spent on it for it to meet earthquake-strengthening standards.

Ministry of Justice general manager of property and commercial Fraser Gibbs said the initial assessment's purpose was ''simply to allow the ministry to assess the risk to occupiers and gain some approximate costs of any remediation''.

The assessment did not include detailed, invasive investigation and designs.

When those detailed investigations were carried out, cost estimates doubled.

However, no details of what those investigations turned up, or the findings or risks which would explain such estimated cost increases, were given to the ODT yesterday.

The ODT asked the ministry whether its makeshift court in High St met the same building standard percentages the historic courthouse needed to meet.

The ministry said although an initial assessment for the High St building showed it did, it could not confirm whether a detailed seismic assessment had been completed.

The ministry said it would be able to confirm whether such an assessment had taken place within 20 working days.