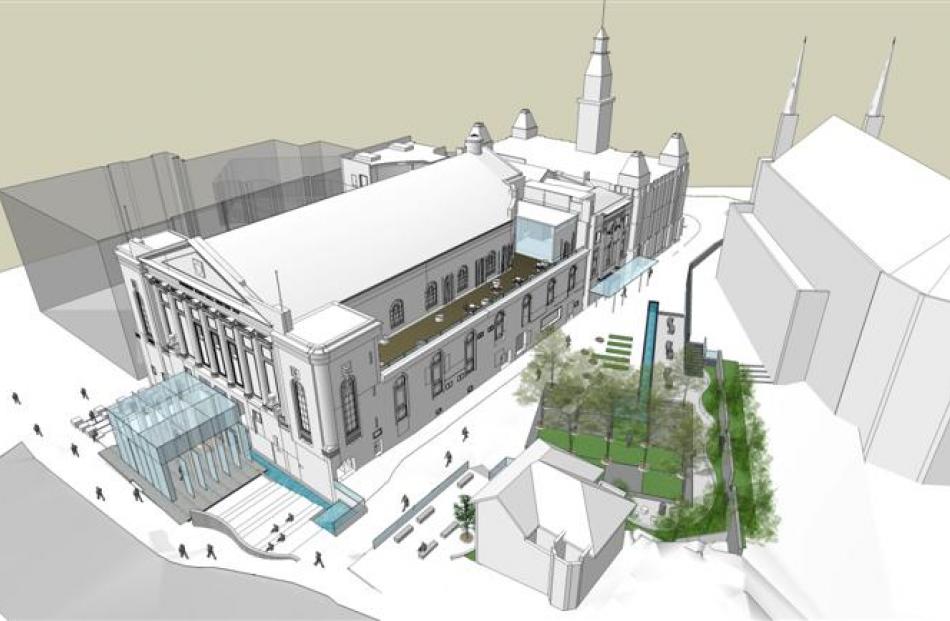 An artist's impression of the new design planned for exterior of the Dunedin Town Hall, with St Paul's Cathedral's soaring Gothic architecture roughly outlined on the right, and the Dunedin Public Library's modern concrete mass indicated on the left.... 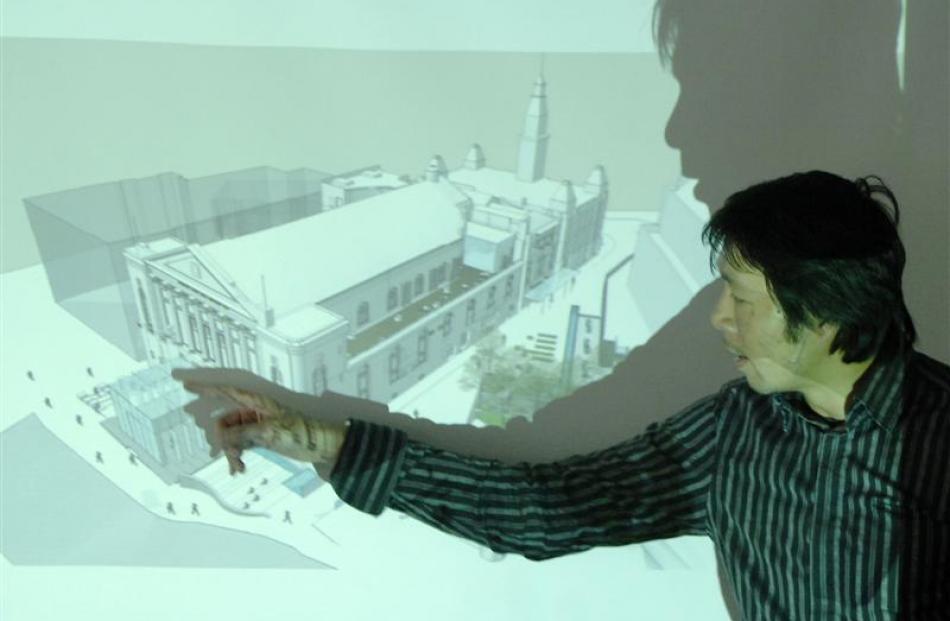 Eqo Leung, of Opus Architecture, hopes the cube will restore the significance of the Town Hall. Photo by Linda Robertson. 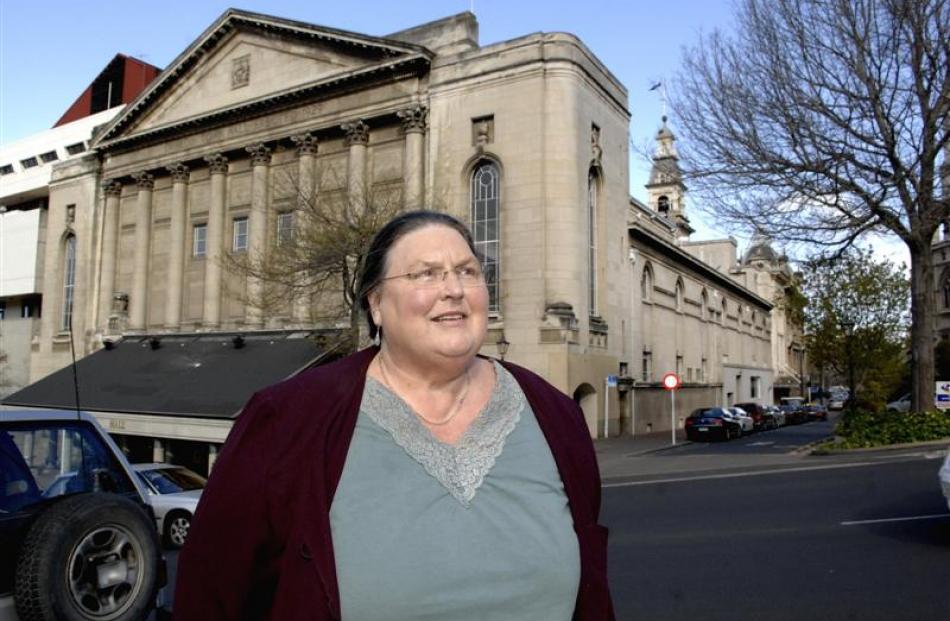 Hands off Harrop founder Judith Medlicott's campaign to stop an atrium being built in Harrop St has succeeded. Photo by Linda Robertson.

A cube-shaped glass entrance has emerged as the centrepiece of a $45 million revamp of the Dunedin Town Hall, part of major structural changes to the historic buildings.

The plans were announced yesterday, with the cube presented in the context of glass pyramids at the Louvre Museum in Paris, and glass additions to the Reichstad in Berlin.

Subject to final approval by the Dunedin City Council on Monday, the work will include removing the existing entrance to the town hall, extending the Dunedin Centre through into the Municipal Chambers, gutting and retro-fitting the Glenroy Auditorium, and upgrading the Town Hall.

[comment caption=What do you think of the new plan?]The design has been praised by the people who opposed former plans for the buildings.

Fire and other regulations required the council to upgrade the buildings at a cost of more than $20 million, and the plans are the latest in a long line of proposals.

They are a change from a design that originally included the widely criticised atrium on Harrop St.

That idea was forced from the agenda after vociferous opposition from Hands off Harrop, which formed to defeat the proposal, and in October last year a council subcommittee backed an alternative option within the envelope of the building.

Mayor Peter Chin said the project was "exciting", and would give the city a top performance and conference venue.

Eqo Leung, of Opus Architecture, said the design would restore the significance of the town hall, a significance that had diminished over the years.

"I wanted the town hall to be a significant landmark, the pride and joy of Dunedin.

The design philosophy for the glass cube was "one of detachment" - it would be attached only where three doors provided access between the cube and the town hall - and it would reveal the building's facade in a much better way than the existing entrance.

The cube, which would have "giant pivot doors" was basically a collection or flow-through point for people visiting the town hall, he said.

Architect Jeff Thompson said the Glenroy Auditorium would have new stairs and lifts, and new performance and conference areas.

The Dunedin Centre would be expanded by making use of the Skeggs Gallery and property services division in the Municipal Chambers next door, and the former site of the Hungry Frenchman restaurant, providing extra foyer space and space for functions and conferences.

Each of those three rooms would hold between 100 and 120 people.

Seating in the Town Hall would be refurbished or replaced, and the hall's infrastructure, including lighting and theatre services, would be overhauled.

While little work was being done in the auditorium itself, the surrounding foyer areas and facilities would be refurbished.

"We have listened to consultation."

Mrs Medlicott said her group had been concerned with all the heritage aspects of the upgrade, and the solution the architects had developed was "fine".

Retired Dunedin architect Ted McCoy, who suggested last year the Dunedin Centre should be extended into the Municipal Chambers, approved the design: "I think it's a great solution."

The former entrance had covered the view of the columns on the Town Hall, a problem the glass cube solved.