Traditional and high-tech for Santa 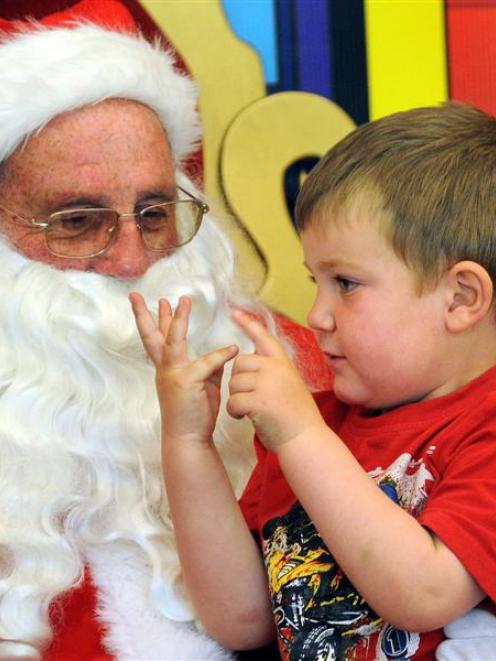 Word from the big guy is that, while he has received the usual requests for Lego and Barbie, high-tech gadgets are in hot demand for older children.

"Barbies for girls and Lego for boys, but a few of the older ones, in particular, are into iPads and Nintendo. I don't know half of what they talking about," Santa told the Otago Daily Times yesterday.

Most children had been "pretty good" this year, but they "certainly" had a few secrets to share with him. One girl told him her mother was pregnant, and the baby was due on Christmas Eve.

When he asked if it was a boy or girl, she was unsure, but replied "We are all hoping she will have it early so we can get away to Queenstown for Christmas", he said.

Another told him they were wishing for a car, while one wanted to organise their own present but needed $100 to do so.

For those parents who wanted to help Santa out with the gift-giving, Toy World owner Linda Verity said select items had been "hot" targets.

Toys which had flown off the shelves in the past two months included Pillow Pets, Geleez, Beyblades and Leap Pads.

Other "standard" toys included everything from Hot Wheels to swimming pools and beach balls.

The Warehouse toy buyer Lisa Coe said the most popular toy for children had been the Air Swimmer, a remote-controlled shark or clown fish filled with helium.

No matter how busy Santa is on Saturday night, hopefully he will get the gift selection right, as a Unicef New Zealand survey released yesterday revealed 34% of people received unwanted gifts last Christmas.

In addition, 25% of those surveyed admitted giving unwanted presents to others.

To be safe, Santa should be aiming to give adults practical gifts, with 67% of people saying they preferred them, and 73% of women and 55% of men said vouchers were a smart move.

Meanwhile, 50% would forego a present for someone to give to charity on their behalf.