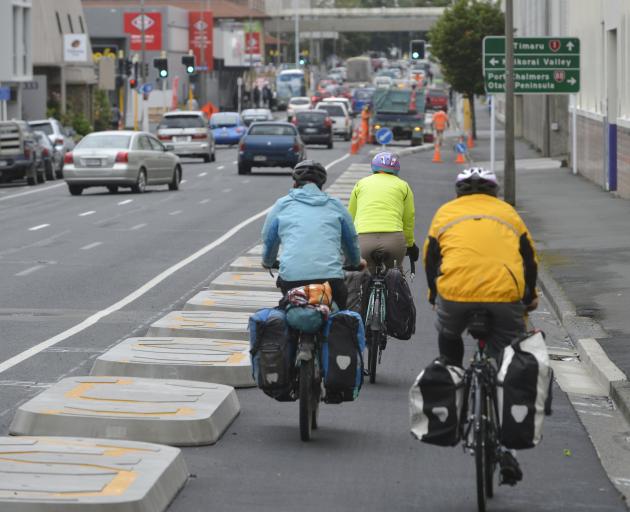 The busy one-way Cumberland Street. Photo: ODT files
Concerns about congestion on Dunedin's one-way systems and the need for multi-storey car parking buildings in the centre city is included in public feedback over the Shaping Future Dunedin Transport project.

Thousands contributed online to the public engagement, undertaken in July 2020 as part of the business case process for the project.

"There were also lots of comments from people who were concerned that changes to the one-way system would increase congestion, halve the roads’ capacity and affect travel time through the city."

The purpose of the engagement was to start a city-wide conversation about the changes the central city transport system may face as the new Dunedin Hospital and other central city developments take shape, he said.

A range of ideas were presented on interactive maps including:

As the project was still in the ideas stage, it was helpful to see the thoughts and concerns of the people that got involved in the engagement, Mr Sargent said.

“It’s clear that while there is general support for a range of parking, public transport, walking and cycling ideas, people are concerned that any changes to the one-way system will result in congestion and delays.

"We’re listening to these concerns and will continue to do more technical work, including traffic modelling, over the coming months as we scope further options for the future configuration of SH1 in central Dunedin.”

"We were keen to give people an opportunity to get involved as early as possible in the process. Understanding what people think, their likes and concerns is an important part of the suite of information we’re gathering to inform the business case.”

At the same time, the project team would progress other work required to inform the Shaping Future Dunedin Transport business case process, he said.

It was working with the new Dunedin Hospital team and other stakeholders, including the University of Otago.

The project team will scope:

There were more than 22,000 total visits to the public engagement website and more than 5000 unique visitors were recorded.

More information would be available as technical studies and other planning work is completed, and people will also have a further opportunity to get involved in the business case process in early 2021, Mr Sargent said.