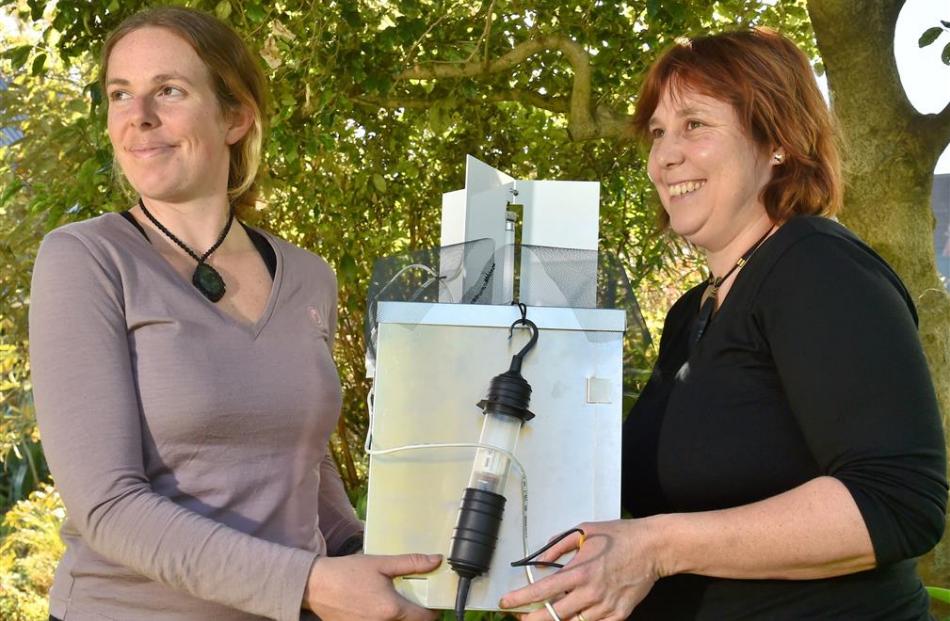 Landcare Research scientist Barbara Anderson and Department of Conservation ranger Sarah Forder with one of the moth traps to be taken to the Antipodes Islands. Photo by Gregor Richardson.

The  effect of mouse eradication on the ecosystem of the Antipodes Islands is set to be tested by Dunedin-made moth traps.

The Department of Conservation will take 12 moth traps on boats to the islands on May 23-24.

The traps were originally due to be taken to the Antipodes in February on HMNZS Canterbury, but the boat was diverted to Fiji to help with the recovery from Cyclone Winston.

The traps had been used by Otago school pupils to collect moths for the Shedding Light on the Night project, which measured the density and distribution of the moth population in Otago.

Dr Anderson said traps from the collaborative project, involving Landcare Research, the University of Otago and the Orokonui Ecosanctuary, would be used in the Antipodes to assist with the larger Million Dollar Mouse eradication project.

Moths were good ecological indicators because of their short lifespan, she said.

The standardised traps would provide a clear indication of the impact the eradication of mice had on other life, which would assist with the Million Dollar Mouse project, she said.

"It will be really clear what is there now, after and compared to the already mice-free islands.''