By Mike Houlahan
0 Comments
Archaeologists have not stuck a trowel in the dirt on the former Cadbury factory site yet, but have already unearthed a treasure trove of precious historical material.

Their prize find has been 16 books containing the business records of Hudson & Co, the Dunedin biscuit and confectionery firm that was founded in 1899 and merged with Cadbury and Fry in 1929. 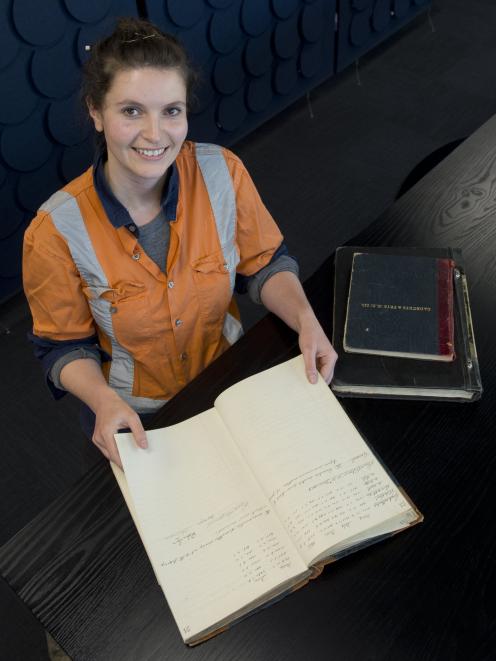 ‘‘We do find some quite extraordinary things on archaeological sites right around the country, but this was really something.’’

The books, found abandoned in a second-floor office cupboard, date back to 1899.

An opening handwritten entry records: ‘‘A meeting of the Directors of this Company was held at the office of R Hudson & Co, Moray Place Dunedin on Monday the 20th February 1899 at 4pm.’’

Amid the shareholding certificates, meeting minutes, wage books and other material is a documentary history of a small business that became a family firm before joining a multinational company.

There are records of upgrades and repairs to workers’ cottages originally on the site, the firm’s first automobile purchase in 1913 — although it hedged its bets on the new technology by also upgrading its stables — and the impact of world wars on the firm’s fortunes.

‘‘There’s someone’s masters or PhD thesis right there, and now they will be available for the historians of the future,’’ Ms Lawrence said.

It was still to be decided where the Hudson company records would be housed.

Archaeologists have also documented and photographed the former factory prior to demolition and as its structures have been pulled apart.

‘‘There are other things we have found like old bottles and old doors; things which weren’t clearly visible when we did our first walk through,’’ Ms Lawrence said.

Digging the history beneath the Cadbury factory, which was originally harbourside land, has to await the demolition of the buildings on site.

‘‘On that site, there was extensive residential development in the 1860s and
’70s.

‘‘We’re really excited to be able to compare between the deeply industrial Cadbury block and the history of human occupation right next door.’’