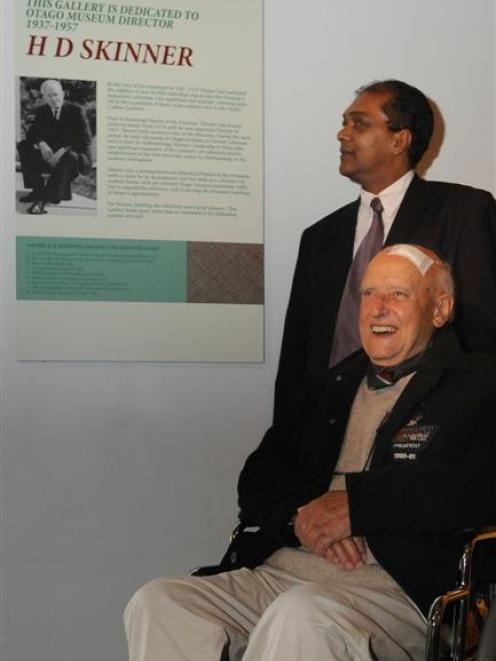 Dr Skinner's son, Richard Skinner (88), who is a former member of the museum trust board, and a group of family members attended the 3pm installation.

Mr Skinner said the installation was a positive move, and recalled, as a child aged about 5, accompanying his father and mother on a visit to the Cook Islands during which items were obtained for the museum's Pacific collections.

Museum chief executive Shimrath Paul said that, following the museum's redevelopment, a small plaque had been placed in the museum's Hall of Polynesia in 2000 acknowledging Dr Skinner.

Subsequent discussions with Richard Skinner over the years had made clear there was a much greater story to tell about Dr Skinner as director, and his role in "amassing an outstanding collection of Pacific items".

Dr Skinner had made an "immense contribution". He had been integral to the development of the organisation, "critical in the creation of what is recognised as an outstanding humanities collection", and vital in the forging of relationships which resulted in an unprecedented level of community benefaction to the museum.

It was also good to be able to celebrate the panel's installation with Mr Skinner, who was himself "a long-time and ardent supporter of the museum", Mr Paul said.

• The panel text noted that before his retirement in 1957, Dr Skinner had facilitated the addition of more than 65,000 individual objects into the museum's humanities collection, and many artefacts in the Pacific Culture Galleries.

Dr Skinner had already achieved much, holding curatorial posts at the museum from 1918, and holding University of Otago positions such as Hocken librarian and lecturer in anthropology, before being appointed museum director in 1937.

Dr Skinner worked closely with pre-eminent Otago Museum benefactor Willi Fels to expand the collection, and to develop the museum buildings to house it appropriately.