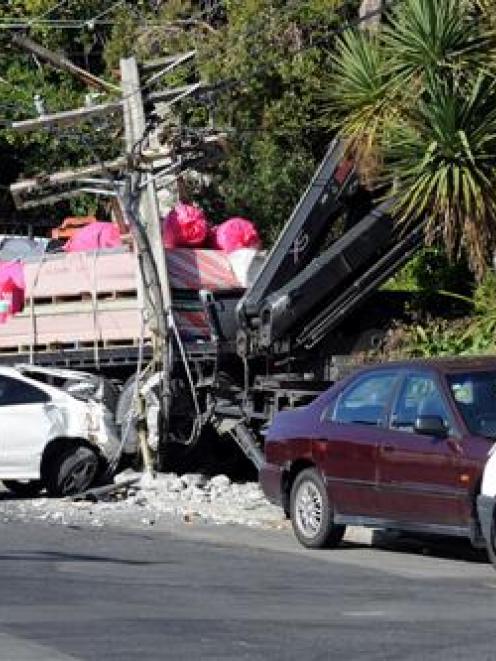 The driver of the Nissan 12-tonne truck was dropping off three tonnes of building materials at a Queen St address shortly after 8.30am, when the unattended 12-tonne truck started rolling back down the street, leaving a costly trail of vehicular destruction.

Over a 60m path, the truck sideswiped a Nissan Cefiro, smashed into a Toyota Celica, shunting it down the road and into a power pole, with the impact causing a Honda Accord to rear-end a Mazda 323, which in turn damaged a Daihatsu van.

No-one was hurt in the incident.

The four parked cars were extensively damaged and had been towed away.

Police were yet to contact three of the owners, strategic traffic unit Senior Constable Bruce Cunningham, of Dunedin, said.

The area was a popular spot for students to park and walk to university, and it was "incredibly fortunate" nobody was around when the truck rolled down Queen St, he said.

The commercial vehicle investigation unit was examining the truck's handbrake to see if it had been applied correctly.

It was too early to say if charges would be laid, he said.

A lineman at the scene said the truck almost struck a substation, which would have exploded, causing extensive damage, had the truck hit it.

Mitchell Transport Ltd owner Bruce Mitchell said he was shocked when he got the call about the incident, but was relieved nobody was hurt.

His driver was experienced, and maintained he applied the handbrake, but that did not seem the case when the truck, which was badly damaged in the accident, was investigated.

Builder Harlem Irwin, who was awaiting the delivery truck so he could begin work on a basement conversion, said he heard a loud bang.

Carrington College warden Ashley Day said he rushed out to the street after hearing an "almighty bang".

Most students were still on holiday, but two working at the college had walked in front of the college 20 seconds beforehand.

A Delta spokesman said power was restored at 1pm yesterday.