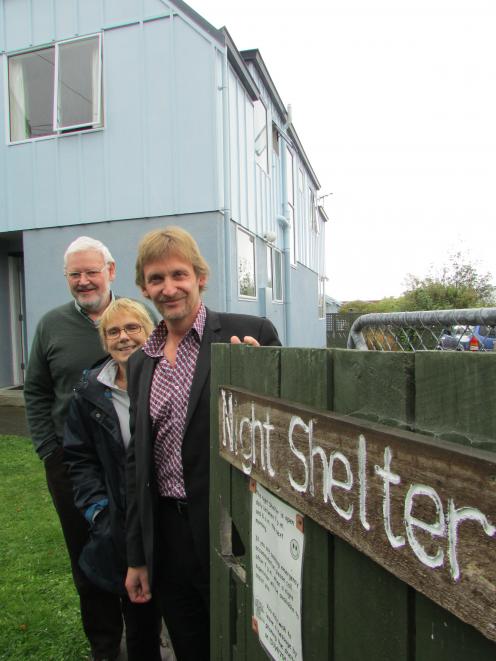 Aiming for independence . . . Dunedin Night Shelter Trust board members (from left) chairman Dave Brown, Diane Davies and John Le Brun, and their colleagues, are launching a fundraising programme for the shelter. PHOTO: BRENDA HARWOOD
The brutal cold snap that hit Dunedin this week has highlighted the plight of the city's homeless and the vital work of the Dunedin Night Shelter Trust.

The night shelter is dealing with a growing demand for its services at a time when funding has grown ever tighter.

To counter this, and in a bid for funding independence, the trust has launched the ''Friends of the Night Shelter'' programme, which invites Dunedin people to sign up to give $5 to the shelter each week. Those who sign up automatically become part of the Taken Care Of discount scheme, operating in conjunction with local businesses.

Dunedin Night Shelter Trust board member John Le Brun told The Star the trust was keen to establish a baseline of ongoing funding.

''Traditionally, our funding model has been to apply to trusts and for grants to cover our operational costs, but the challenge with that is that there is no stability around it.

''So what we did as a board was to come up with a way we could add value back into the community, while obtaining the funds we need to cover costs and expand,'' he said.

The shelter needed about 500 Friends to cover its basic operational costs but hoped to gather about 1000, enabling it to provide counselling and social work services.

Board members had talked with local people and businesses and the feedback was that, while it was good to see exciting developments for the city, people also wanted the most vulnerable taken care of.

''We've seen an increase in recognition of homelessness as a community issue across the board with support in varying forms from many sectors of the population.''

Dunedin Night Shelter Trust chairman Dave Brown said demand was growing for the trust's services, with the Lees St shelter hosting 70 bed-nights in the past month.

''The usage of the shelter definitely goes up as it gets colder. There are simply fewer options for people in cold weather,'' Mr Brown said.

As well, a wider group of vulnerable people were coming to the shelter for help, including older people, women and children.

''We are seeing more families turning up on the doorstep, and we need to respond to that.''

Trust board member Pat Robertson said one of the challenges the trust faced was the perception among some in the community that the shelter worked with people who chose to live on the streets.

''This is not so. The people we are seeing are in genuine need and come to us for a whole raft of reasons.''

Only a small percentage of people used the shelter more than once, she said.

''It is heart-wrenching to see women with young children coming for help - the issue is far wider than you may think.''

Mr Le Brun said there were many reasons people came to the shelter. Often, they had been ''tipped over the edge'' financially by a major event, such as the loss of their job, which could lead to a domino effect.

''The respite provided by a night or two in the shelter can help arrest the downward spiral that these people have found themselves in,'' he said.