Tuition fees will rise at the University of Otago next year, the university council has decided.

''I'm not opposed to the fee rise on principle ... we should avoid the habit of raising fees on each occasion,'' Mr Martin said.

''Debt is a very real issue to students.''

He said the fee rise would mean students paying $500 extra or more by the end of their degrees, a significant sum to students, he said.

''Ask any student on campus if they would like an extra $500, and watch their eyes light up.''

''We understand the money has to come from somewhere ... but I'll be voting against the fee rise,'' he said. 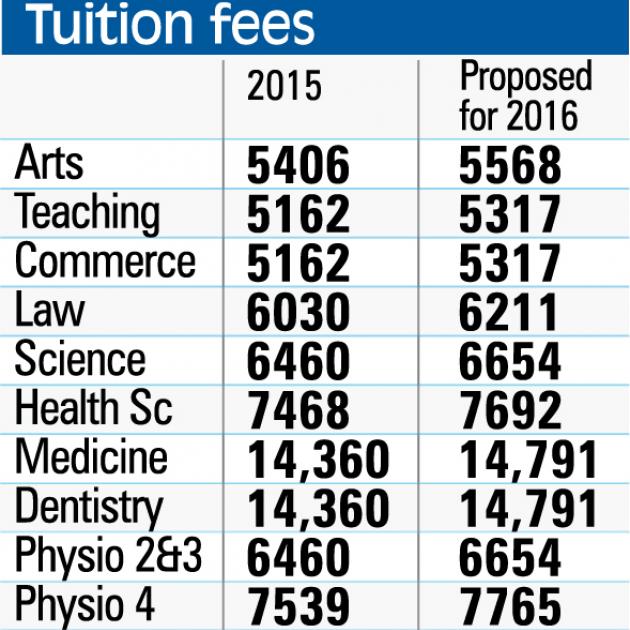 Prof Slooten suggested there were other ways the university could make ends meet without raising tuition fees, such as being ''more prudent'' with campus beautification projects.

''It's wrong to say [the university] is prioritising beauty over things that are more essential.''

Prof Hayne said the 3% rise was necessary to [offset] ''what the Government is failing to do in funding commerce and the humanities''.

The university had already taken steps to reduce costs wherever possible, she said.

Before the fees matter was put to a vote, chancellor John Ward said he did not think there was anyone around the table who wanted to increase student fees.

''Except we recognise that it's the right thing to do,'' he said.

''It's a little bit of pain for everyone, every year.''

Mr Hunt said the vote for the increase was unsurprising, but disappointing.

''The whole process is quite frustrating in some respects because it has become quite formulaic,'' he said.

''The council knows the student representatives will vote against the fee rise, and they understand why.''

Nonetheless, he said, fee rises continued to be voted through, year after year.