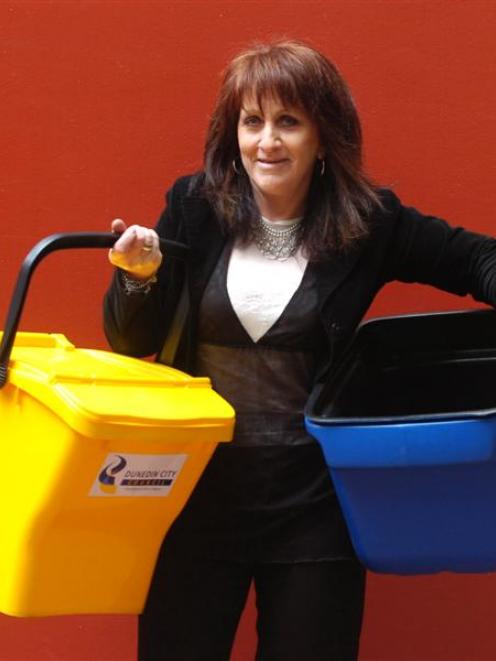 Water and Waste Services business support leader Narelle Barbour shows the proposed new yellow, lidded recycling crate and the present blue crate. Photo by Jane Dawber.
A recycling crate with a lid has been adopted by the Dunedin City Council, but how much it will cost and even its final colour have yet to be determined.

Yesterday, councillors voted for a two-crate recycling service - with the present blue recycling crate used for glass, and a new lidded crate introduced for mixed recyclables.

The collection of the crates would alternate fortnightly.

At an extraordinary infrastructure services committee meeting yesterday, councillors elected to adopt "an additional recycling crate with a lid" rather than the "yellow recycling crate" recommended by a special kerbside collections committee.

Part of the debate centred around the proposed new 40-litre crate - whether it should have a lid to control street litter, and if it would be yellow.

Cr Fliss Butcher said the new system "was quite a moment" and provided a cost-effective option for the people of Dunedin.

Cr Andrew Noone said it was a flexible and fair system, which could provide additional service options in the future.

The three-year contract with a three-year right of renewal for the kerbside collection, which included the lidded crate option, would cost an estimated $97 per household per annum, as opposed to $88 for the non-lid option.

If the contract length was for a seven-year term, the estimated price would be between $65-$75.

The prices were indicative only, and would change as a result of the tender process, expected to begin at the end of January, solid waste manager Ian Featherston said.

The new system could begin as early as December 2010.

Asked how many councils had adopted a recycling crate with a lid, Mr Featherston said "none we are aware of".

Other councils providing wheelie bins had adopted yellow lids for mixed recyclables, and there was some merit in adopting a standard colour, he said.

It was also a possibility the lid could be clear, to assist with compliance of the collection process.

Tenders for the new service would be sought on the basis they could provide additional value-added recycling collection services, such as larger bins.

Payment for value-added services would be between the householder and the service provider, and of no extra cost to council.

- It will consist of a fortnightly alternate week collection of. -The present blue crate for glass (bottles and jars).

- An additional recycling crate with a lid, for collection of mixed recyclables (plastics 1-7, and tins), with paper to be bagged separately, and cardboard separated and tied.