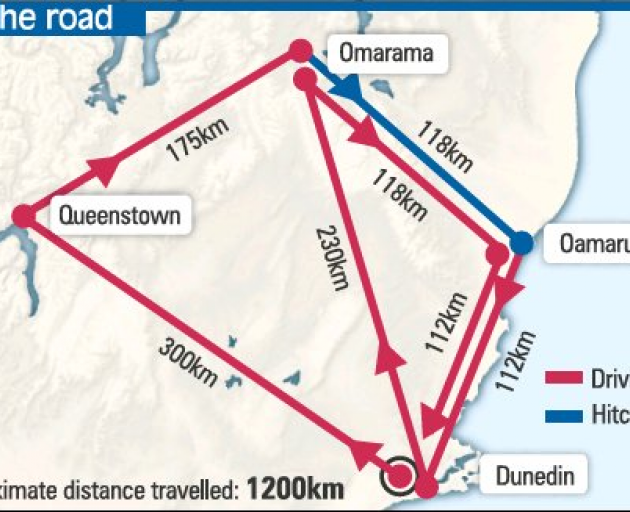 An unemployed Dunedin man faces five criminal charges and the likelihood of more after an alleged 48-hour, 1200km joy ride.

Dunedin police apprehended the 22-year-old man late on Wednesday, allegedly at the end of a two-day journey through Otago.

Sergeant Matt Scoles, of Dunedin, said the alleged offending began in South Dunedin on Monday when the man took a car.

He filled it with petrol and drove off without paying, then drove the car from Dunedin to Queenstown, where he again carried out a ''petrol drive-off'', Sgt Scoles said.

The man then drove the car to Omarama, where it broke down.

''He then hitchhiked from Omarama to Oamaru, where he acquired a rental car. Our inquiries are continuing into how he got that car and if he had any intention of returning it,'' he said.

From Oamaru, the man drove the rental car to Dunedin, where he again allegedly stole petrol, before driving it to Omarama.

Sgt Scoles said the man then damaged the rental car as well as the car he allegedly stole from South Dunedin on Monday.

''We are still investigating how that damage occurred, but he faces two charges of intentional damage in relation to being responsible for the damage to the vehicles.''

From Omarama, the man drove the rental car to Oamaru, where he allegedly stole more petrol before driving the vehicle to Dunedin.

Police apprehended the man at his Dunedin home, where he had parked the rental car.

Sgt Scoles said the man ''effectively handed himself in'' and was co-operative. He was likely to face further charges, as police investigations continued.

Sgt Scoles said it was not yet known whether others were involved.

He said the man had a driver licence, and it appeared ''one thing just led to another''.

The rental car was being returned to Oamaru, and the owner of the vehicle taken from South Dunedin was arranging to have it picked up from Omarama, Sgt Scoles said.