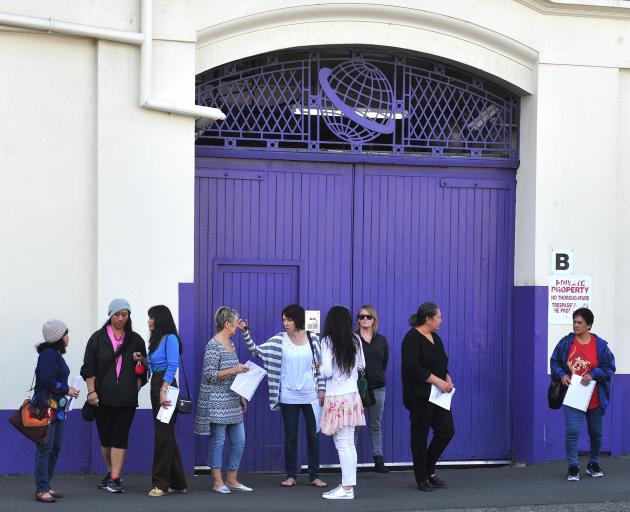 Staff outside the iconic Dunedin Cadbury factory. Photo: ODT.
The takeover of Cadbury is leaving a bitter taste in the mouths of chocolate fans and workers  from the United Kingdom to Dunedin. Chris Morris reports.

The stories are the same, even if they are a world apart.

Two big Cadbury factories, providing crucial employment to hundreds of workers, fell into the hands of a multinational giant that shut the gates on a proud history built on Quaker values.

It’s a story that has already played out in Cadbury’s Somerdale factory, in the United Kingdom, and now history is threatening to repeat itself in Dunedin.

Keynsham is a town of about 16,000 people squeezed between Bristol and Bath, in Somerset, southwest England.

It was also home to a Cadbury factory, built in the heart of the town in the 1920s, which, at its height, employed up to 5000 workers.

In 2007, Cadbury announced plans to close the factory in three years’ time, at the cost of about 500 jobs, as production shifted to Poland.

Then, in 2009, there was a sliver of hope as  United States-based conglomerate Kraft launched a takeover bid to acquire Cadbury, and indicated it would keep the Keynsham factory open, BBC News reported.

But, days after the sale was confirmed, Kraft reneged, arguing the transfer to Poland was too advanced to stop.

The company — which later spun off its snacks business into a new entity, Mondelez International —  was accused by workers of "a cruel manipulation" and acting in an "utterly despicable" way.

And, as the Otago Daily Times discovered this week, the sour taste lingers  in the UK town, even seven years on.

That was despite progress on the redevelopment of the site into a much-needed housing and retirement village complex, showing there could be life after Cadbury.

Stephen Rodgers, editor of the weekly Keynsham newspaper The Week In, told the ODT many in the town felt the company’s Quaker traditions had been "sold out by the Cadbury board to maximise profits and satisfy the concerns of institutional investors".

Those Quaker values encouraged a loyal workforce, many of who remained in the town all their working lives.

But with so many staff close to retirement, the company was able to persuade them to accept enhanced redundancy packages, forcing the unions to "stand down", he said.

And, despite a "continued and high-profile campaign" by town residents, "the ink was in effect dry on the deal".

The town had survived the economic effects, and the former factory site provided much-needed space for 600 new homes, as well as the retirement village.But that did not mean the "resentment" had disappeared, he said.

"Cadbury was an icon that was very much a part of the town’s history and heritage ...  I think everyone felt there was a difference between what was morally right and corporately desirable.

"Of course, in such cases, the corporate argument always wins."

One of those to fight the closure was Amoree Radford, a former Somerdale factory worker, who led the campaign to keep the "hugely profitable and productive" plant open.

She told the ODT she remained "pretty sick" at the closure and the loss of a piece of the town’s history.

"I still cry almost every single day. The loss, and my involvement, was so huge," she said.

Not all the factory’s workers  lived in Keynsham, and the economic effects were difficult to judge, he said.

The Bath and North East Somerset Council, which he represented,  tried "without success" to work with Kraft. The land had since been sold to developers, but the council had made job creation a condition of its redevelopment and invested "substantially" to retain jobs in the rest of the town, he said.

That would boost foot traffic for nearby businesses  while easy access to the adjacent railway station would help ease traffic congestion for  workers travelling to nearby Bristol, he said.

One block of the former factory had also been earmarked for an "employment" redevelopment, although he was "yet to hear of any employers signed up to relocate to the premises".

Cr Gerrish remained positive, saying the regeneration would benefit the community, but council chairman Alan Hale was less sure.

Residents had threatened to boycott Cadbury products after the closure, "but that gradually petered out", and promises of "higher-level" jobs with redevelopment had so far failed to materialise.

And without them, the resentment aimed at Kraft and Mondelez International remained, Cr Brian Simmons, also of Keynsham, said.

"They represent all that is wrong with greedy global companies. They do not have an iota of humanity in their make-up," he said.

"sold out by the Cadbury board to maximise profits and satisfy the concerns of institutional investors" Er yes, that's precisely what businesses are supposed to do. If they're not, that's when it's time to worry.

And this case proves precisely this point --- not only were the workers perfectly happy with the closure, but the town of Keynsham has ended up being better off as a result. The only lingering "resentment" lies solely in the minds of a few unreconstructed socialists.

Of course, anyone concerned more with the interests of Community than that of big business is a Socialist, or something.