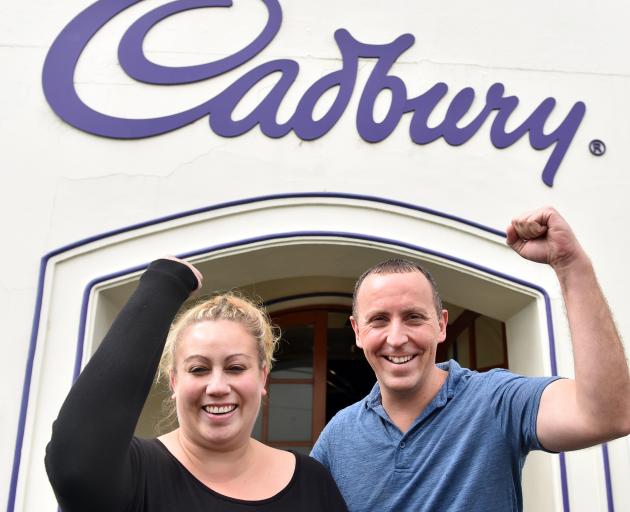 Former factory employees Leanne Dewes and David Bettis look ahead to a bright future as they stand outside their former workplace. PHOTO: PETER MCINTOSH
Twenty-two Cadbury staff are today swapping factory overalls for graduation regalia after they enjoy a final morning tea with workmates.

The 22 are taking part in this afternoon's Otago Polytechnic graduation ceremony, having achieved qualifications through Capable NZ, a school within the Polytechnic.

Capable NZ has been working closely with 31 Cadbury employees during the past year, following the announcement of the factory closure.

The other nine employees from the courses are not graduating with the cohort today but are "on track" to graduate from their courses in a December ceremony.

For Dunedin woman Leanne Dewes, front-line leader of the enrobed starch team which worked on products such as Easter eggs and pineapple lumps, today's graduation signals "a new start".

Ms Dewes (41) is graduating with a bachelor of applied management degree.

She first started working at Cadbury in 1995 and has been employed there, on and off, in various roles. After completing the Capable NZ course, she had intended having a holiday before she started job-hunting.

But that could change as she had an interview with a recruitment agency yesterday morning and was feeling "positive".

"One door closes and another opens," Ms Dewes said.

Ms Dewes and fellow graduand David Bettis agreed the past year since the factory closure was announced had been "really tough for everyone".

They were both grateful to have been given the opportunity to gain a formal qualification which would help them towards new employment. The company had subsidised their courses.

For Mr Bettis (40), a reliability engineer with Cadbury since 2010, taking part in the Capable NZ course had landed him a new job - at the Otago Polytechnic where he will start next week as a lecturer in electrical pre-trade courses.

"I'm really keen to start and to gain new skills," the UK-born electrical engineer said. He had worked in manufacturing, food and chemical industries and had mentored young workers.

He is graduating with a bachelor of engineering technology (electrical) degree and had learnt about his new job only in the past couple of weeks.

Cadbury site manager Judith Mair said there were more than 130 staff still on the Cadbury site, just over 30 being involved in manufacturing, the rest working on decommissioning and winding-down operations.

Decommissioning actually began in December as production lines were progressively shut down and manufacturing equipment was removed when it was no longer needed.

The decommissioning had "really ramped up in the last month with a number of the production areas now cleared of equipment," Ms Mair said.

Thirty-four employees (including the 22 graduands) were finishing work today and the majority, about 60, would be finishing on March 29. A few would remain until the end of April to complete the decommissioning.

The company was working with a real estate company on the next steps in the site sale process, Ms Mair said. That would get under way once decommissioning had reached a point where prospective buyers could assess the site "when it's largely clear of our manufacturing equipment".