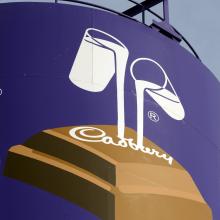 Glass and a half empty at Mondelez NZ. ODT file photo
Mondelez New Zealand Investments, who owns the closed Cadbury factory in Dunedin, reported a before-tax loss of $17.4million for the year ended December.

The loss came after the company allowed $47.3million for restructuring and other associated costs, and compared with a $10.6million profit for the 2016 financial year.

Mondelez NZ claimed nearly $7.5million in tax credits to narrow its reported loss to $9.9million from a $7.6million profit last year after paying nearly $3million in tax in the previous corresponding period.

In the notes to the financial statements, Mondelez said the ability of the group (Mondelez Investments and its subsidiaries) to continue as a going concern depended on ongoing support of its ultimate shareholder and its ability to assume profitable operations.

The New Zealand group claimed $38million on depreciation in the financial year, including costs arising from the changes in the useful life of property, plant and equipment of the Dunedin manufacturing site. Depreciation was $7.5million in 2016.

Employee remuneration was stated at $35.8million. Post-employment benefits (including severance payments) reached $18.34million, compared to $655,000 in 2016.

So after closing a profitable factory resulting in the loss and stripping our economy of income, the taxpayer is effectively refunding 2 and a bit years worth of taxes to offset the aforementioned closure . Wow. Whats the bet that with the closure the NZ branch will make a "loss" in the coming years to as they service the debt to themselves and shifting profits offshore resulting in more tax refunds further negating tax income gained from them over previous years. Effectively they are being rewarded for closing up shop by being able to retroactively able operate tax free for the last few years. Closing up shop like this should nullify any claimable tax rebates and/or write offs , while ongoing businesses are treated as is while expansion is given increased tax incentives. Ie if you want to close up shop you wear the costs , but are encouraged to expand etc.