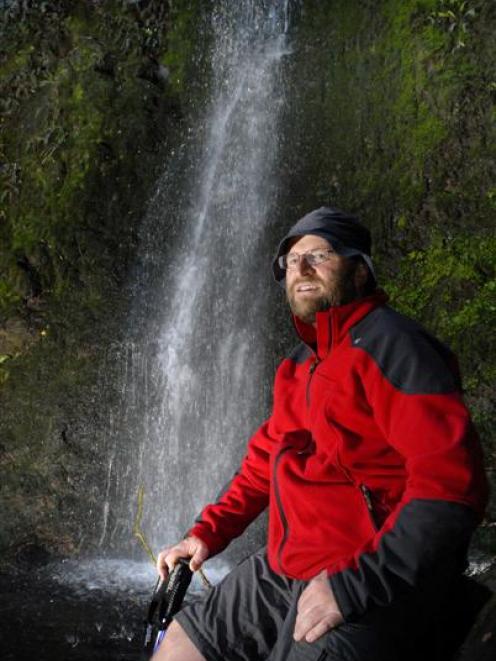 Beside the 15m-high Nicols Falls, Dunedin lawyer and tramper Antony Hamel considers the city's "amazing range of walks". Photo by Gregor Richardson.
Dunedin lawyer Antony Hamel is an enthusiastic explorer of the city's many tracks and trails, including those linking heritage attractions in the inner city streets, as well as those on the city's outskirts and crossing nearby mountains. He discusses with John Gibb what he had in mind in writing his recent book, Dunedin Tracks and Trails, an illustrated guide to Dunedin walks, tramps and mountain bike routes.

For Antony Hamel, a lawyer, tramper and tireless compiler of Dunedin track guides, many of those tracks offer a taste of genuine wilderness only minutes away from the central city.

And, under the name Silver Peaks Press, self-publishing is exactly what he has done with his latest track guide, Dunedin Tracks and Trails.

He also enjoys writing something a bit more lively than the usual legal documents destined initially for a rather small audience and then a dim half-existence among the files.

And humour flickers, like summer lightning, over his latest book.

When asked, for example, how long the various city walks take, he points out that the completion times cited in the book are, indeed, his actual walking times.

"They reflect the time taken by a middle-aged, balding and slightly overweight lawyer and the various people who were with him."

"How long will you be? Always a tricky question. If I do not know I always say two hours. This seems a safe answer but can be wildly wrong."

"Dunedin is fortunate in having an amazing range of tracks within a short drive of the city centre," he comments early in the book.

The guide's aim is to "motivate people to explore Dunedin by foot or by bike."

"Walking is a great form of exercise. Excellent levels of fitness can be obtained by taking a brisk 30- to 60-minute walk each day."

The hour-long Nicols Falls walk is a good example of a dash of wilderness experience, found tantalisingly close to the central city, after a drive through Leith Valley, via Malvern St.

Now relatively little-known, this was a major Dunedin tourist attraction in the 19th century. And you can still see glow worms there at night.

"It's like you're in this canyon with water falling - it's quite bizarre because you're within 20 minutes of central Dunedin," he says.

After completing an Otago LLB in 1984, he headed abroad for his OE the next year and spent six months cycling about 12,000km around England, Ireland and Germany.

After returning to Dunedin he found himself again enjoying the city's "diversity of tracks".

"I suppose it's that sense of exploring or trying to go somewhere.

"Dunedin has got something quite special.

"Within an hour's drive of Dunedin we have this amazing set of scenery and incredible places to go walking," he says.

But, by the early 1990s, he noticed that few people were actually using some of the tracks, and there was a lack of good guide books about them.

" I became frustrated by the lack of information about the Dunedin tracks. It was a bit like solving some sort of mystery.

" You would listen to a vague description about some new track, usually accompanied by some wave of a hand.

" You would see clues, like track markers at the side of and existing track, and discover some route heading up a ridge.

" Some times the tracks fizzled out to nothing or disappeared over time. At other times whole track networks unfolded.

"It became like a game of hide-and-seek. The enjoyment was in the hunt and discovery."

Subsequently, the first edition of the From Sea to Silver Peaks guide book appeared in 1993, co-authored with geologist Dr Graham Bishop and published by McIndoes.

A second edition, in four reprints, appeared between 1997 and 2002 - also co-authored with Dr Bishop but published by Mr Hamel.

"I also became fascinated with the act of collecting background material - factoids - and creating the publication.

" Pieces of history and trivia can be used to enliven an area."

There were limits on what the earlier book, essentially a black and white publication, could look like.

"However, by 2000 technology had moved on so it was practical to publish in colour. Maps and photographs looked stunning in colour."

And creating a colour guide meant writing a completely new book- which appeared this year.

Self-publishing a book requires a range of skills.

Controlling the whole process of creating content -writing, photographing and map making- as well as designing the book and organising printing and marketing can be "a bit daunting".

He notes that Dunedin tracks - the subject of the guidebooks - are "forever changing".

"Over the last 20 years the track network in Dunedin has expanded and tracks have improved.

"Volunteers have maintained and have created or reopened new routes in more remote areas. Casual walkers, mountain bikers and runners appear to be making more use of the tracks.

"New tracks cause guidebooks to go out of date.

"This has given me the opportunity to write and self-publish an entirely new book, working on the base of material that Graham and I had created in the previous guides.

"The second edition of Sea to Silver Peaks described 30 new tracks. A further 25 new tracks are described in the new guide.

"The new tracks range from the high quality Harbourside track from the boat harbour to Maia to the mysterious and difficult-to-follow network of tracks west of Swampy.

"The Harbourside track is three metres wide, flat, sealed and traffic free. This inner-city track has seen lots of use.

" Despite the proximity of a sulphuric acid plant-some interesting smells- and heavy industry, this track has great harbour views.

"There can be dozens of people on the track at any one time, including young cyclists, dog walkers, runners and buggy pushers.

"These wilding pines have now been cut down, adding further mystery to the wild zigzags the tracks make as they traverse the hillside in a drunken manner."

Preparing the new book had been "a great excuse to get out and explore every corner of Dunedin."

"I walked to the ends of every beach, from Waikouaiti to Taieri Mouth, and found many new nooks and crannies.

He does warn people not to take some of Dunedin's tracks too cheaply, including those in mountainous areas.

Choosing routes suitable for the physical fitness of participants is also important, as is wearing the right clothes, and having the right equipment, including raincoats and cellphones.

And becoming lost remains "an important activity" even if walkers are equipped with the finest of guide books.

"A guidebook does not stop tramping trips becoming epics.

"Weather, taking a wrong turn, tracks becoming overgrown, lack of fitness or gathering darkness can all lead to a day walk become an unplanned overnight camp or a late evening scramble.

"Never underestimate Dunedin's hills. There are adventures aplenty for those who want to explore all their folds.

"When the [latest] guide was finished I took a final draft and my GPS into the track network west of Swampy.

"We got lost. We found a new track.

"Initially, I was disappointed. Was my guide a failure? No. It meant you could still have adventures and the guide would never be finished - just a work in progress."