Wanted to break up in civil way: Weatherston 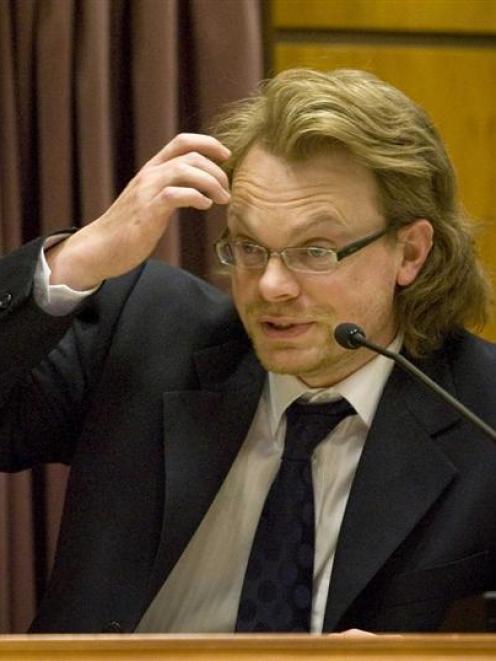 Murder accused Clayton Weatherston in the witness box in the High Court at Christchurch yesterday. Photo from The Press.
He realised he must have used a knife on Sophie Elliott when he saw a cut on his hand, the man who killed the young honours student in her bedroom told Justice Judith Potter yesterday.

Clayton Weatherston (33), a former University of Otago economics tutor, stabbed and cut 22-year-old Miss Elliott 216 times with a knife and scissors, mutilating areas of her body, at her home on January 9, 2008.

But he denies murdering Miss Elliott, his ex-girlfriend, and claims he was provoked into losing control when she attacked him with a pair of scissors.

Weatherston told the High Court at Christchurch on Monday he remembered little of what happened after that, other than his glasses being knocked off and grabbing Miss Elliott hard around the throat while she was scratching at his face.

In answer to questions from Justice Potter, he said he noticed the cut on his hand just before a police officer came into the room "after I'd picked up my glasses".

He put his glasses on and looked around the room.

"You just looked at the cut in your hand?"

Weatherston said he just looked around.

"So, you wouldn't have observed the injuries to her body," the judge said.

"The only reasons you thought you must have used a knife was the cut in your hand?""No, some of the movements I recalled," Weatherston said.

"Pushing away, pushing her away from me."

Asked to describe the pushing away movement, the accused spoke of "an arcing motion", but "more of a pushing Sophie away from me".

The judge asked Weatherston to clarify when he said his relationship with Sophie was terminated.

His view was it was ended after his concern over an incident outside the Commerce Building on December 17 when he went to kiss Miss Elliott as her supervisor, Robert Alexander, was driving past.

He had gone for a meal with his new girlfriend that night.

"You've told us you decided it was over, but when was it terminated for Sophie?", the judge asked.

Weatherston agreed he had not told Miss Elliott on December 17 that the relationship was over, although, in his mind it was.

After an incident at his flat on December 27, when Miss Elliott said he assaulted her and tried to rape her, allegations he denied but which concerned him, he believed she knew the relationship had ended.

He agreed he told his new girlfriend on Boxing Day that he intended to officially break up with Miss Elliott the next day.

"So when Sophie says in her diary that she went to your place to give you gifts and break things off in as nice a way as possible, she's not describing what happened because you were breaking it off?" Justice Potter asked.

"I don't know what her intentions were, but I was wanting to break things off and do it in as civil a way as possible," Weatherston said.

He was not "100% sure" of Miss Elliott's feelings before that meeting, but agreed "both of us knew that was the state of play" on December 27.

"So what did you go round there for on January 9?" the judge asked.

Weatherston said he had "some things to talk about", the relationship, what her thinking was and "I obviously expressed concern about the potential for a sexually transmitted disease,".

He was concerned about her paranoia in the relationship and "obviously concerned" about her allegations of assault and attempted rape.

He disagreed with them and wanted to make it clear they could have far reaching implications for him.

"I was upset with her and wanted her to know there was no reason to put such allegations around - for whatever reason."

He also wanted to return gifts from her "as a sort of insult" and he wanted to leave, having "had the last word" and got a few things off his chest.

They would not see each other again and would both move on.

Weatherston agreed that when he went to the house on January 9, he had officially terminated the relationship on December 27.

He has agreed the knife he used to kill Miss Elliott was in his laptop bag when he arrived at the house on January 9.

But the Crown yesterday accepted Weatherston did not bring the scissors with him, as suggested by Mr Bates on Tuesday.

Weatherston says Miss Elliott attacked him with scissors she picked up from the floor before he killed her.

He could not explain how there was blood in the outside pocket of the laptop bag.

He was surmising the altercation occurred, he was holding Sophie off and was bleeding when he got the knife out.