Warning over 'conspiracy theorist' US leader 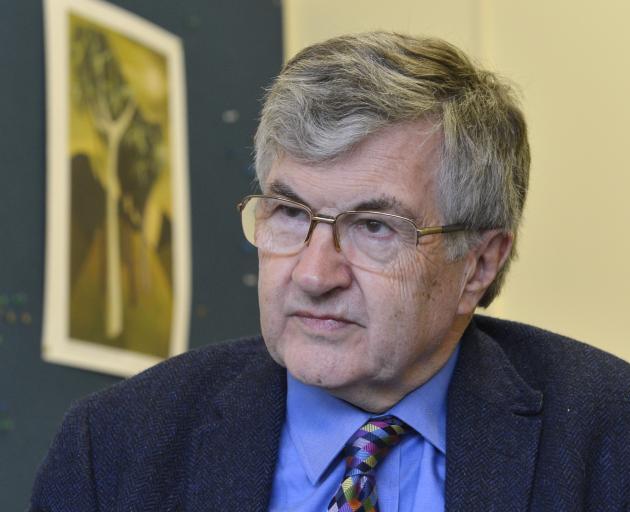 Whether defying Holocaust deniers or considering alternative facts, one thing is essential about the truth, he says.

"There is only one truth: you can't have competing truths, you can only have one."

"You can have competing claims to be true - that's somewhat different - but if two statements claim to be true only one of them can be true; the other is false.

"What is new in the political world is a growing indifference as to whether something is true or not ... some populist politicians don't seem to care whether a statement is true or not; all they care about is whether it works for them."

Sir Richard has taught 19th-century European history much of his career, but is also a respected chronicler of the history of Nazi Germany.

In recent years, he has helped lead the Leverhulme Conspiracy and Democracy Programme.

"For the first three years we thought we were dealing with a phenomenon which was fascinating in itself but was very much on the fringes of society and politics," he said.

"We were thinking that the danger conspiracy theories posed was somewhat exaggerated, but since the rise of Donald Trump the whole agenda has changed because we now have a conspiracy theorist in power."

The Trump White House not only brought conspiracy theories to the centre of political debate but also used "open, brazen lies" as a ruling technique.

"Politicians have always been a bit economical with the truth, as it were, but that is very different from a politician who uses untruths as an instrument of government," Sir Richard said.

"The whole project has now taken on quite a different aspect and funding has now been renewed by the Leverhulme Trust, largely on the grounds that the era of post truth and alternative facts is upon us, and that makes what we are doing very interesting."

Tonight, Sir Richard speaks before a screening at the university of Denial, a film depicting the 2000 libel trial where author David Irving sued American historian Deborah Lipstadt for calling him a Holocaust denier.

Sir Richard was an expert witness for Lipstadt, who defended the suit.

The case turned on an argument whether the Holocaust happened or not. Sir Richard's performance under cross-examination by Irving was a pivotal moment.

"It is dispiriting that people still ask how much of it (the Holocaust) actually happened," Sir Richard said.

"The evidence is absolutely overwhelming; you only have to read the judgement to realise that.

Sir Richard, who gave a guest lecture at Otago in 1986, said he was delighted to be returning to deliver the 2017 Michael King Memorial Lecture at the university on Thursday.

An interest in counter-factual - or "what if?" - history inspired his topic: War In The Nazi Imagination.

"There are a whole string of counter-factuals about what if Hitler had invaded and conquered England, for example ... which seemed to me to misrepresent what war was about for the Nazis," Sir Richard said.

"You have to measure whether war is successful or not by its aims: you look at the aims of the war and then you look at if it turned out like that in the end or not.

"The misconception here, I think, is that Hitler had concrete, finite aims and that he would have stopped at some point.

"It's a misconception which affects statesmen in Europe in the 1930s, the appeasers ... what they couldn't grasp was that for Nazis, war was not something finite, it was infinite."

Hitler believed a race could not survive unless it was hardened by perpetual warfare, and evidence suggested his regime would have continually moved on in search of its next conquest, with the United States a likely target after success in Europe, Sir Richard said.

"In that way, defeat was pre-programmed because the scale of the Nazis' ambition far outweighed any possibility of realising it."

Evans on the nature of war

"War has changed its nature: the days - which still lasted until 1939 - where one state formally declared war on another and the ambassador went and handed back his credentials and there was a whole ritual to declaring war, came from the 18th and particularly the 19th century.

"Wars in general had very definite and clear, relatively limited  aims... now war is not formally declared at all. Famously in 1982 when Mrs Thatcher reacted to the Argentine takeover of the Falkland Islands, she didn't say it was a war, she said it was a conflict: there was no formal declaration of war on Argentina at all.

"Now we kind of slide and drift into conflicts of various kinds, particularly the second Gulf War in which Saddam Hussein was defeated by an American-lead coalition. They didn't actually declare war on Saddam Hussein. War is now used as a metaphor, such as the `War on Terror' - it's more a policing action, with war used as a metaphor to justify various tactics that they have used."

Evans on war and race.

"For Hitler and the Nazis, World War 2 was a racial war: it was a war of the Teutons, the Aryans, against the Slavs, the Latins and so on. World War 1, in that sense, was a much more conventional war, between states.

Evans on Hitler and what he knew about the Holocaust

"Hitler was not somebody who tended to write down decisions, he wasn't a bureaucrat.... he did a lot of things on the hoof and those tended to be verbal. If you are look for an actual written order from Hitler saying `we will exterminate Jews' you won't find one, because that's not how he decided things... the Party machine, the SS, the Brown Shirts, the Stormtroopers, got used to interpreting these rather vague orders and putting them in to concrete effect.

"After (the 1941 invasion of Russia) there was a massive propaganda barrage from every level of the Reich propaganda machine lead by Hitler and Goebbels in speeches, newspaper articles, news reels and so on, blaming the Jews for the World War, for the fact America was swinging around to support the British, for the Soviet Union being ruled by Jews - which was an absurd idea, Stalin himself was anti-Semetic.

"The vehemence of the language used against this `Jewish world conspiracy' to destroy Germany was then interpreted by Himmler as an order to  kill all the Jews, which happened in stages, all very quickly after one another. That is how I think it happened, and there is plenty of evidence that Hitler knew what was going on."

Evans on truth and the media.

"I am very proud to have been involved in the David Irving case and I think we proved comprehensively that he was a Holocaust denier and that Holocaust denial rested on a falsification of the evidence. It has taken me aback to realise that, not necessarily that specific form of untruth but that more general forms of untruths and lies, have come in to the centre of culture, and I think the internet has a lot to do with that.

"Those gatekeepers have gone... editors who would basically control what came in to the public domain and what didn't, in the sense that only reasoned discourse was out there, by and large. Now those gatekeepers have gone and its a free for all for prejudices of all kinds, and I think that's a very difficult thing that the world has to grapple with, and so far it has not managed to do it.

"But in the end I still believe you can establish the truth and that ultimately people are going to listen to you."