Warning to watch out for 'the big hairy fella' 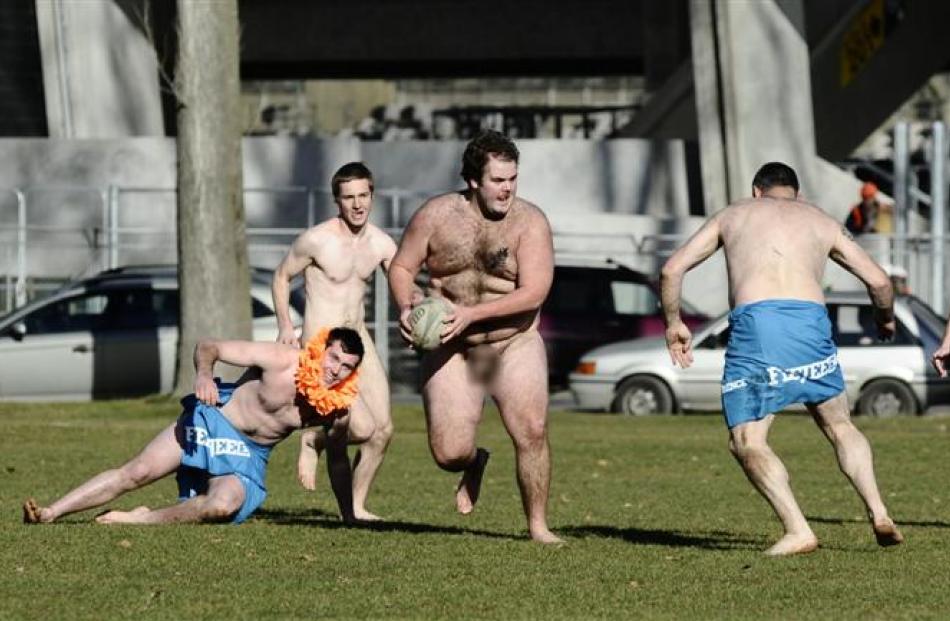 The difference between nude rugby and its clothed counterpart?

"You don't have much to grab on to and you are a bit more wary of the bits," says Rachel Scott. And she should know.

The 21-year-old was named player of the day, after scoring a try and helping her fellow Nude Blacks repel a late charge from a spirited Fijian Invitational team to win 20-10 at Logan Park in Dunedin yesterday.

Scott, a member of the Otago women's rugby team, and the only female to don the Nude Blacks official strip yesterday, said she was a late call-up and "you couldn't turn that sort of invitation down. We are in Dunedin; this is what it is all about . . . you only live once."

Billed as the unofficial curtain-raiser to last night's All Blacks-Fiji test, the annual seven-a-side encounter at Logan Park attracted more than 500 spectators, including a sizeable media contingent.

Moments after being sent off by blind referee Julie Woods, Fijian Invitational player George Dooley (21) said: "I am absolutely appalled. I can't believe the referee saw it."

Dooley said the secret to playing nude rugby was watching out for "the big hairy fella".

"I try to make it look like I am going to tackle him and then get someone else to do it."

Also sent to the sinbin was Nude Black Nick Buckley, who said the warm-up was the most intimidating part, but players soon forgot they were naked.

Mr Bourke said he hoped to still be playing when he turned 50, and planned to write to the New Zealand Rugby Union requesting a test match.