Warrior has the stones for a celebration 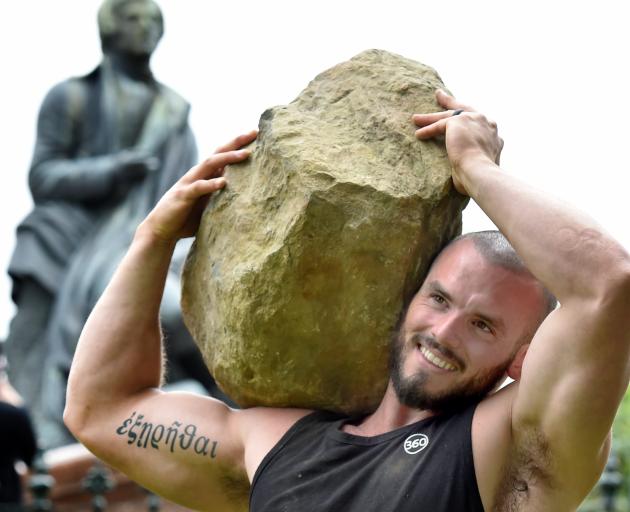 It’s a modest claim but it comes from a man who will play an important role in Dunedin’s St Andrew’s Day celebrations today.

Dunedin strongman Jayden Hill will lift the Manhood Stones — up to 140kg lumps of Oamaru stone — this afternoon as part of events to mark Scotland’s national day.

He is no stranger to heavy lifting. He is a previous winner of the under-105kg category in the Strongman World Championships.

"Then I went and did all the stones of strength around Scotland and Iceland," he said yesterday.

He was awarded the title "fullsterkur" — or warrior — for his stone-lifting while in Iceland.

He will appear at one of several events in the Octagon, many revolving around traditional music and food: from pipe band performances to a speed porridge eating contest at noon.

Mr Hill, a police recruit, will lift the stones — a staple of the Highland Games —just after 1pm. He hopes to get people in the crowd to have a crack, too.

The stones belonged to the Dunedin Edinburgh Sister City Society, which had them made

in homage to a tradition where people are challenged to lift heavy natural stones to prove their strength.

It is a custom found not only in Scotland but also in Wales, Scandanavia and in northwest England.

Mr Hill said the lifting of the stones tradition had been around for centuries.

It was rich with meaning. In Scotland, there were stones that a man had to lift to join the army and, in one area there was a stone which had to be carried up the stairs of a castle before someone could become chieftain.

The celebration runs from 10am to 2.30pm at the Octagon Carriageway and Lawn. It will be opened by the City of Dunedin Pipe Band, before a speech by Deputy Mayor Christine Garey.

It will include performances from Cutgut’n Steel, the Dunedin Harmony Chorus, and the Ghillie Callum Dancers. There will also be a haggis ceremony.