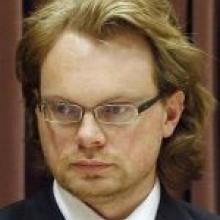 Clayton Weatherston
Convicted murderer Clayton Weatherston faces a harsh introduction to prison life where his crime and superior demeanour are likely to make him a target for rough justice, a criminologist says.

Dr Greg Newbold, of Canterbury University, said the 33-year-old, who was found guilty on Wednesday of murdering Sophie Elliott, will have to go into isolation when he begins what will probably be a long jail term.

He was "almost certain" Weatherston would be sent to Paremoremo's maximum security prison, following his sentencing in September.

But, wherever he goes, Dr Newbold doubted he would get any sympathy.

"He will be well known . . . they will be anticipating his arrival; the screws will, too. They will be given instructions to protect him from assault. Whether or not that happens is another thing."

Dr Newbold said it would take Weatherston at least three years to fully assimilate into the prison culture as he came to grips with its intricacies, rules and inside hierarchy.

Much depended on how Weatherston adapted to his new environment and how he dealt with his incarceration.

"I heard he was a very good tutor at university and was good at explaining complex things to students. That aspect of his personality might save him from a lot of grief," he said.

"But, on the other hand, the aspects we saw in the [witness] box, the arrogance and so on, might work against him. Mind you, there is nothing like a couple of good hidings to stop a person being arrogant."

"Certainly, initially, it would be the safest thing to do," he said.

Weatherston's "personality disorders" would be problematic not only for inmates but also for the authorities, who would expect him to submit to their directions.

"That would be very hard for someone who is narcissistic," Mr Workman said.

"There is going to be the pecking order with inmates and he won't be at the top of that list . . . being a middle-class and white intellectual, he will have difficulties and his placement will have to be very carefully managed."

Sensible Sentencing Trust spokes man Garth McVicar doubted Weatherston would be sent to a maximum security facility, although he thought his crime warranted it.

"Even though this man has committed one of New Zealand's most atrocious crimes, his history as a hard-core recidivist is not there."

The sentencing is set for September 15 in the High Court at Christchurch.