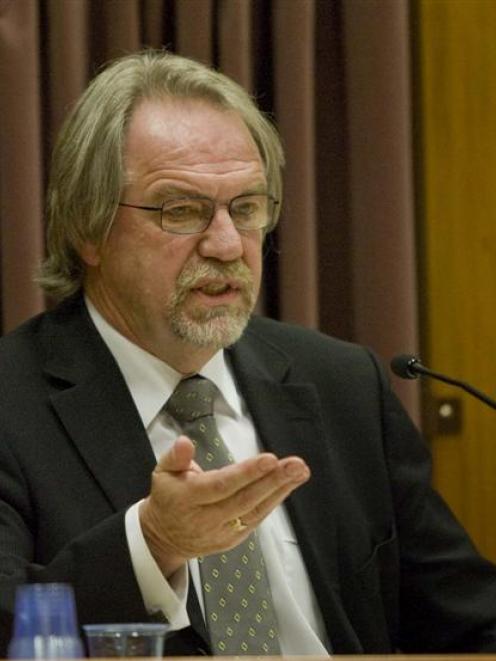 Associate Prof Philip Brinded gives evidence in the Clayton Weatherston murder trial in the High Court at Christchurch yesterday. Photo by The Press.
Clayton Weatherston's "significant lack of empathy or remorse" over the killing of Sophie Elliott were apparent to a psychiatrist who interviewed him in prison in May last year, the High Court in Christchurch heard yesterday.

Associate Prof Philip Brinded, a specialist psychiatrist since 1987 and the Canterbury District Health Board chief of psychiatry, said Weatherston appeared to accept no responsibility for what had happened in the relationship he had with Miss Elliott and for what he had done.

Weatherston tried to control the interview by using a handwritten chronology of events he had prepared and became anxious and resistant to questioning that meant he had to deviate from the chronology.

The chronology did not contain any details of the alleged offending.

The accused spoke at great length of his view that Miss Elliott had been abusive to him in the relationship and intimated quite strongly that, from his perspective, "she was responsible for the state of affairs in which he now found himself".

"He appeared to lack empathy or remorse, instead expressing frustration at the fact he was now incarcerated whilst people spoke positively with respect to Miss Elliott and that the university had even initiated a trust in her name," Prof Brinded, the second of two psychiatrists called by the defence, told the court.

Weatherston said he thought his trial might "help to redress this `imbalance'."

During his cross-examination on Tuesday, Weatherston agreed he had spoken of his frustration about a trust having been established in Miss Elliott's name.

It was his frustration at what he called "the contrived legacy and misrepresentation of her character", he told Crown counsel Robin Bates.

He also said he was "clearly not Sophie's biggest fan, because of the relationship" that, in his view, she was "an attempted murderer" or had committed an attempted assault.

Weatherston maintained Miss Elliott had been portrayed in a different light from his experiences of her, that there had been "rewriting of reality".

The 33-year-old former University of Otago economics tutor denies murdering Miss Elliott, who was stabbed to death at her Ravensbourne home on January 9 last year.

He admits her manslaughter but claims he was provoked and reacted when Miss Elliott attacked him with scissors.

Prof Brinded said that after speaking to Weatherston for five hours on May 16 last year, he found no evidence of any serious mental disorder then, or when the accused killed Miss Elliott.

Neither was there anything to show Weatherston had been in a state of automatism.

The accused was largely dominated by narcissistic personality traits, with some histrionic characteristics and borderline traits.

He showed "quite significant narcissistic personality traits" in that he seemed to "evince a grandiosity and sense of self-importance which is quite marked".

"While clearly academically very capable, it appears he has also made some quite exaggerated claims about his academic potential, particularly given that he has never apparently managed to study full-time due to the stress he believes it places on him," the witness said.

There was certainly a sense Weatherston believed himself to be "special" and he was described as frequently needing other people's admiration.

His personality style was described by others as "interpersonally exploitive", "although he does not believe that is the case".

Weatherston had shown an affective instability in his relationships over some years that could be associated with the borderline traits Prof Brinded believed were present.

It certainly appeared Weatherston's "sense of entitlement, his grandiosity and his apparent resentment at Sophie Elliott's behaviour towards him" led him to the view he should go and visit her on January 9.

Although the accused said during the interview he "largely anticipated she would not be there", the reasons he gave for going "somewhat contradict that claim" and, in his view, "encapsulate some of the aspects of personality disorder described", Prof Brinded said.

The witness said he had asked Weatherston if he had read the pathologist's report of "the horrendous injuries" sustained by Miss Elliott during the attack.

Weatherston said he had but was unable to offer any explanation and speculated they might represent "the emasculation of the relationship", or that they were somehow related to his feeling Miss Elliott "used sex as a weapon".

To Crown counsel Marie Grills in cross-examination, Prof Brinded agreed Weatherston did not fit any specific personality disorder as described in the most commonly used diagnostic text.

But the text was "a blunt instrument" where each personality disorder had a list of eight or nine requirements that had to be satisfied and "people are not really like that, so it's not uncommon for people not to fit exactly into those categories".

The issue he had was how to convey to counsel that, to try to understand what had happened "in this dreadful situation", it was going to "lie in the realms of personality, that's where it will be".

It was not a mental disorder, the witness said.

The other issue he was grappling with when writing the report was that after interviewing Weatherston he had been left "with a very strong sense . . . he appeared to take, at the time, no responsibility for what had gone wrong in the relationship or even what happened".

"So, when writing my report, I struggled with how to describe it by concentrating on narcissism and, to a degree, borderline and histrionic traits to a level that I thought were quite marked," Prof Brinded told Mrs Grills.

Mrs Grills suggested that, having carried out only one interview with Weatherston and having spoken only to the accused's mother to obtain background information, that he did not have a proper basis to reach the conclusion he did.

But the witness told defence counsel Greg King in re-examination he felt perfectly confident the report he wrote was based on sufficient evidence for him to express the opinion he did.