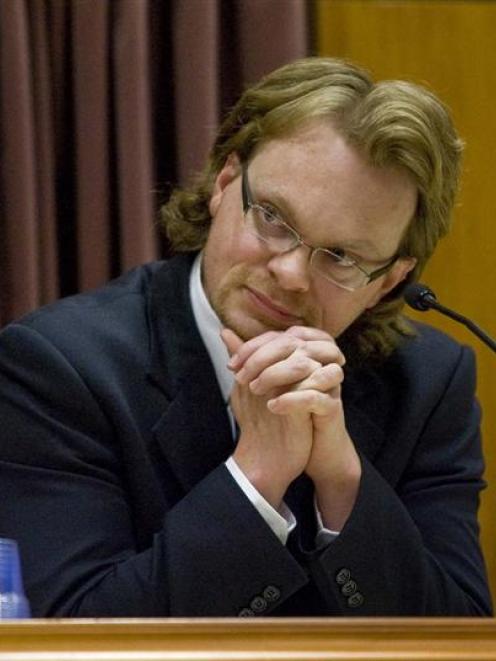 What the former University of Otago economics tutor did then was "systematically mutilate" the 22-year-old's body, Crown counsel Robin Bates said, asking "Did you use the scissors for that?"

"I don't know," the accused replied.

Weatherston (33) admits stabbing and cutting Miss Elliott 216 times with a knife and scissors, but denies murdering her.

He earlier told the High Court at Christchurch he did not go to her home with the intention of killing her. He says he was provoked and lost control when she attacked him with scissors.

The 11 jurors hearing Weatherston's trial on a murder charge have been told he went to the Elliott house in Ravensbourne about 12.15pm on January 9 last year and, within a short time, had stabbed his ex-girlfriend to death and disfigured her body.

He had brought the knife with him in his laptop bag, but said it was one he habitually carried for self-protection because of safety concerns when leaving the university late at night.

The Crown says the attack was determined, persistent and focused, and aimed at destroying aspects of the young woman's physical beauty.

But Weatherston says his perception was of Miss Elliott as a person and he was more attracted to her mind than any particular physical attribute.

When he arrived at the house, he was intending to return some gifts she had given him. He had them in a plastic supermarket bag. He said Miss Elliott greeted him with a kiss on the cheek and the lips, although Mr Bates reminded him Miss Elliott's mother had not mentioned seeing any kissing.

Weatherston did not agree there had been no conversation between him and Miss Elliott before the incident, although Mrs Elliott told the court her daughter had come downstairs saying she did not know what Weatherston wanted, that he was just "sitting there not saying anything".

The accused did not agree there was no further conversation between the time Miss Elliott returned to her bedroom and when her mother heard her screaming within a short time "Don't Clayton, don't Clayton".

Mr Bates suggested Weatherston had locked the door when Miss Elliott returned because he had decided to kill her and did not want to be interrupted.

"You had things to do and we found out what they were. It was going to take a considerable time," he said.

Even when Mrs Elliott managed to get the door open, the accused had pushed it shut again because he did not want to be interrupted, Mr Bates said. Miss Elliott had not attacked Weatherston in any way and had not knocked his glasses off .

"You made that up," he told the accused.

"You lock the door, take the knife out of the bag and start attacking her in the corner of the room," Mr Bates said.

"I can't be certain where she was," the accused replied.

"And inflicted wounds on her neck. There was blood spattered over the walls. And the knife breaks at some stage?"

Asked what he was doing for the scissors to be between Sophie's legs, Weatherston said from his recall, they were dropped.

"What were you doing with the scissors?"

"I recall being over her and the scissors in her throat, and them grinding against something. At that point, everything stopped. That must be when the scissors were dropped."

Asked whether it was "just coincidence" he had told a friend the previous day that he hated Miss Elliott, Weatherston said he hated the things she had done and the way she had behaved in the context of being displeased with her.

In reference to an incident on December 27 when Miss Elliott said he assaulted her, tried to rape her, then chased her to her car and told her he wished she had been killed returning from Australia, the accused said he did not chase her and his comment was "of frustration, not of lethal intent".

To a suggestion there seemed to be "some underlying sexual aspect" in relation to the injuries he inflicted, Weatherston asked "What do you mean?"

Mr Bates said it appeared that, having killed Miss Elliott, the accused then systematically mutilated her. There was clearly a sexual aspect given the injuries.

"I'm not sure how to answer that," Weatherston replied.

"You inflicted these injuries carefully and systematically?"

Weatherston accepted he had told a woman friend the previous day he was not going to be "controlled" like Miss Elliott's previous boyfriend, but said that was in terms of the relationship between him and Miss Elliott being over.

He suggested her aggressive reaction to his lack of compliance was to demonise. He said he was not happy in the relationship and was expressing that.

"So, it's a coincidence you make that comment one day and she's dead the day afterwards?" Mr Bates asked.

"Yes, you're misinterpreting," the accused said.