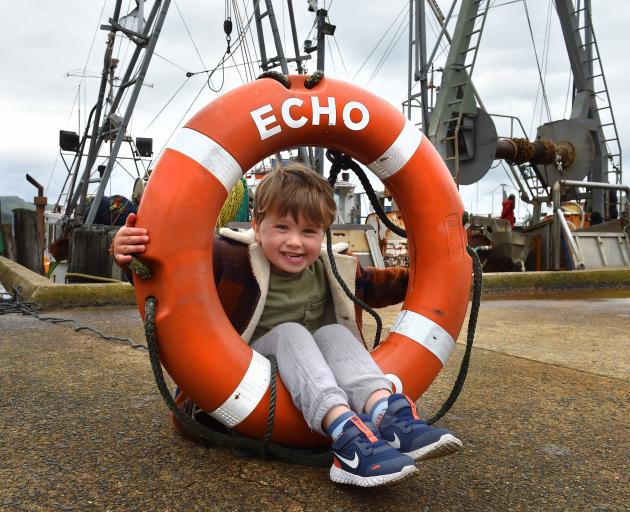 Oliver Paterson savoured his taste of the fishing industry at the Meet the Fishers open day in Careys Bay on Saturday. PHOTO: GREGOR RICHARDSON
The day started out well for Oliver Paterson.

The Dunedin 4-year-old said he had wanted to be a fisherman for as long as he could remember, and he was in his element during the Meet the Fishers open day at Careys Bay wharf on Saturday.

When it was explained to him that fishermen were not allowed to catch all of those things, it was hard for the youngster to hide his disappointment.

Oliver was one of more than 150 people who visited the open day, hosted by the Port Chalmers Fishermen’s Co-operative Society and local commercial inshore fishers.

There had been negativity towards commercial fishing recently, and it was hoped the event would show the transparency and regulation in the industry.

Commercial fisherman and event organiser Ant Smith said it was a great opportunity to speak to the public about what was harvested and how.

Those in the fishing industry, since the quota management system was introduced, were the best of business people and fishers combined.

They were operating in a public space and it was important to connect and reinforce their social licence to be in that space, he said.

The event was a veritable candy store for children and adults alike.

While eating monkfish sliders, adults got tips on how to fillet various fish.

Children got to look through portholes into large tanks filled with a variety of sea life and explore the decks of local fishing vessels.